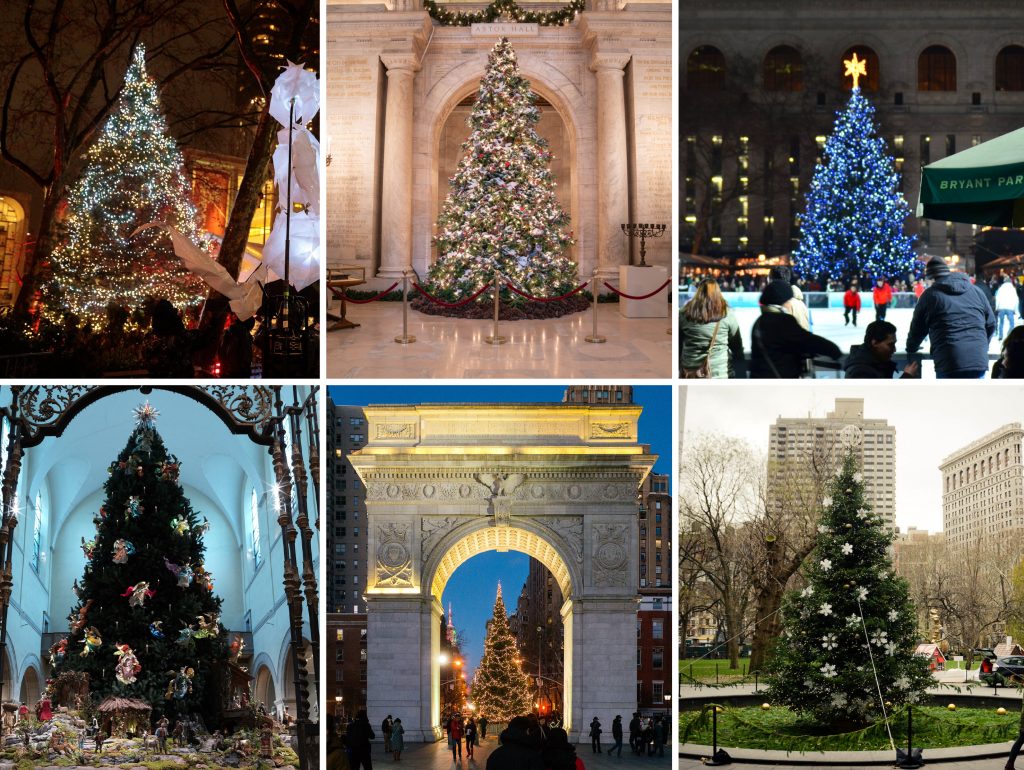 The Christmas Tree at Rockefeller Center may be the most popular conifer in New York City, with 125 million people visiting the tree each year, but it certainly is not the only one.Every holiday season, spruces adorned with colorful lights and ornaments pop up across the five boroughs. The citys many holiday trees each offer a unique take on the tradition, which began in NYC in 1912 when thefirst public Christmas tree was erected in Madison Square Park. For those looking to skip the Midtown crowds this year, weve rounded up 20 of this years best holiday trees and lighting ceremonies, from the origami tree at the American Museum of Natural History to the flotilla of trees in Central Parks Harlem Meer. 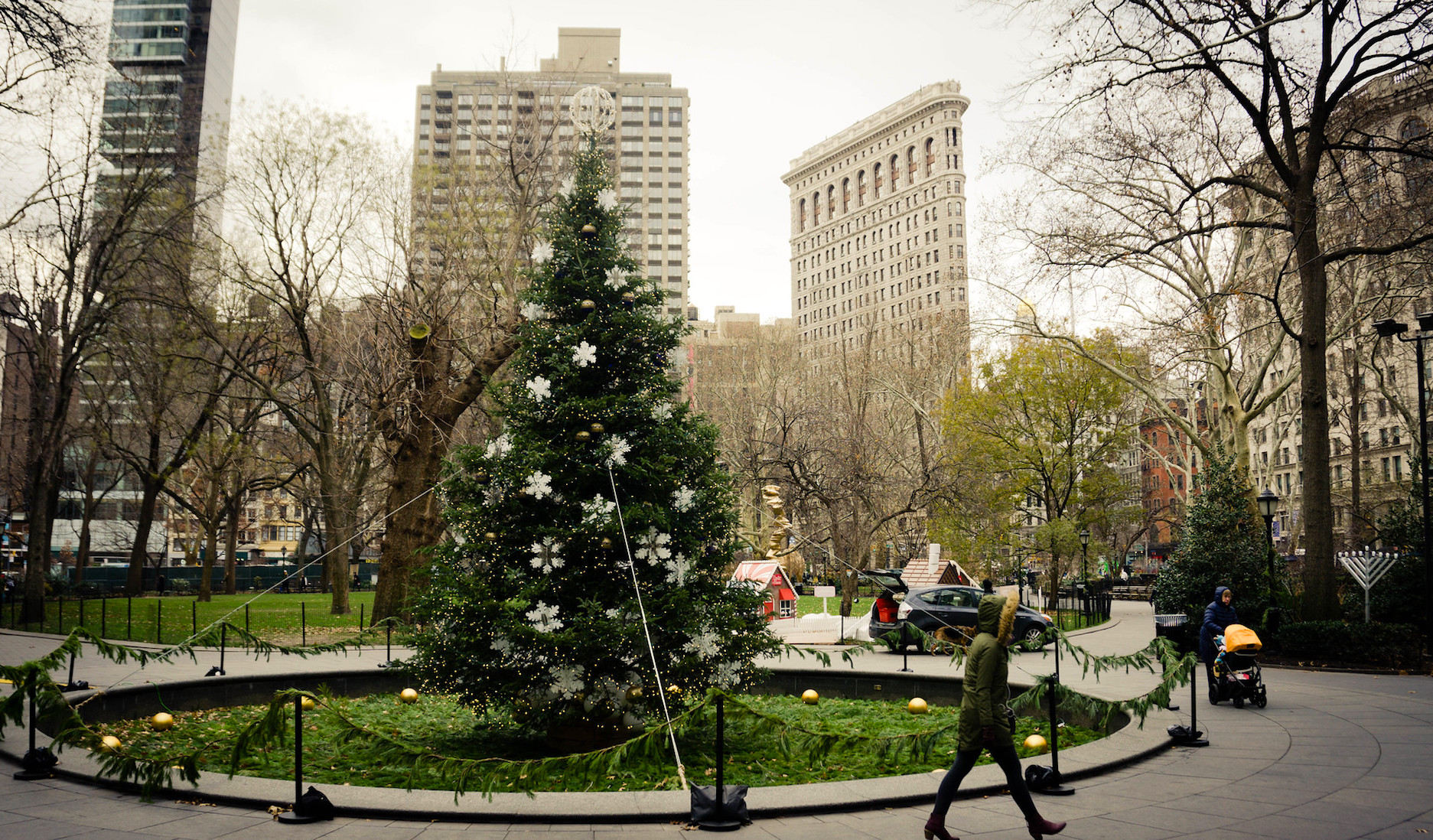 The nations oldest public Christmas tree lighting ceremony can be found in Madison Square Park. In December of 1912, ahorse-drawn truck traveled with a 60-foot tree from the Adirondacks to Manhattan. Adorned with 2,300 colored bulbs from the Edison Company, the tree became the first of its kind, sparking the idea for outdoor Christmas trees in public spaces across the country. Continuing its over 100-year tradition, Madison Square Park will be hosting its annual tree lighting ceremony on Thursday, Dec. 5 from 3:30 to 5:30 p.m.

The all-ages event will include live music from Lucy Kalantari & the Jazz Cats and New York Life Singer and the flip of the switch from Council Member Carlina Rivera. Details here. 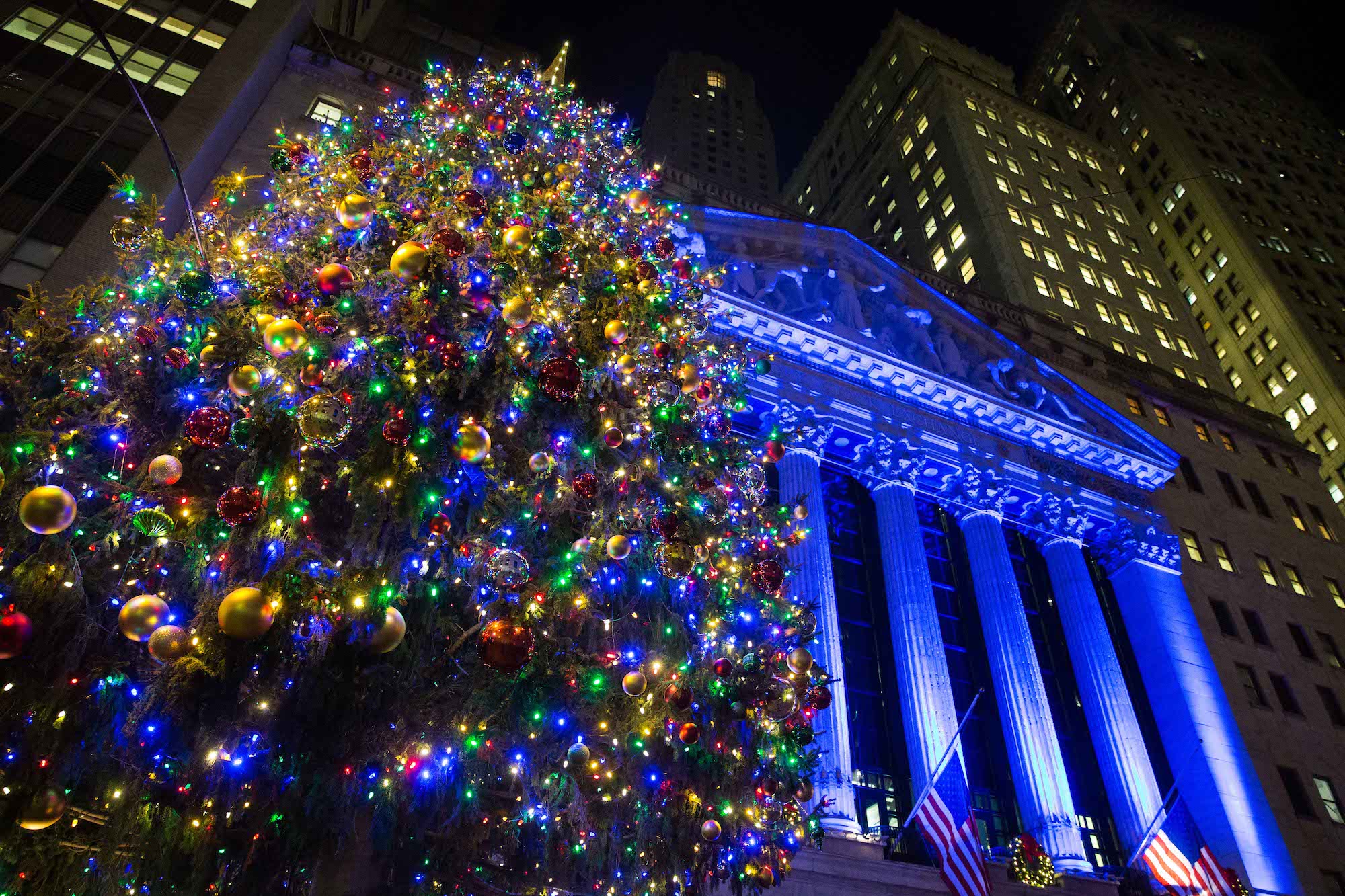 Photo courtesy of the NYSE

Since 1923, the New York Stock Exchange has been lighting up Downtown Manhattan with a sparkling Christmas tree. This year, the 65-foot high spruce, hailing from Northvale, NJ, will be decorated with 100 strands of multi-colored lights, 500 ornaments, and a six-foot star on top.

As one of the citys oldest holiday traditions, beating out the first tree at Rockefeller Center by a decade, the NYSE Christmas tree lighting ceremony is also one of the most star-studded events of the season. Kicking off the NYSEs 96th event on Dec. 5, Chef Jos Andrs will serve as this years VIP lighter, followed by performances from Dionne Warwick, stars from the Phantom of the Opera and Dear Evan Hanson, the West Point Cadet Gospel Choir, and more. Taking place at 11 Wall Street, the event is open to the public and will also be live-streamed here. 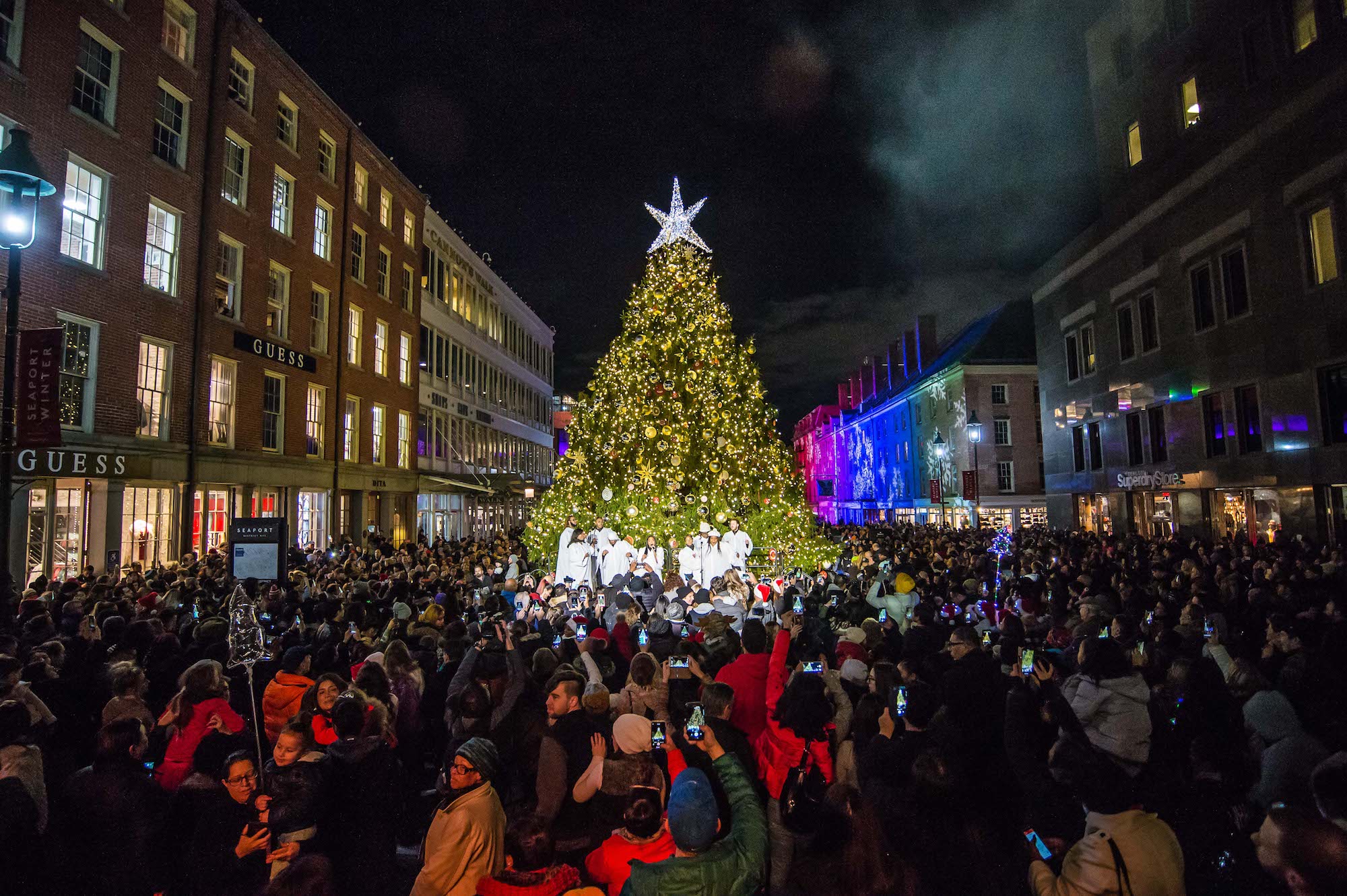 The Seaport District has become a one-stop-shop for winter fun and holiday festivities. In addition to its stunning skyline-facing rooftop ice rink at Pier 17, the neighborhood boasts one of the prettiest holiday trees in the city. The Seaport Districts 50-foot spruce was lit on Dec. 2 as part of a free ceremony that included performances by Broadway casts, carols from a local choir, fitness challenges, and an after-party on the roof. For those looking to get a jump start on decorating for Christmas, a tree farmwill be openbetween Piers 16 and 17 at Seaport Square through Dec. 23. 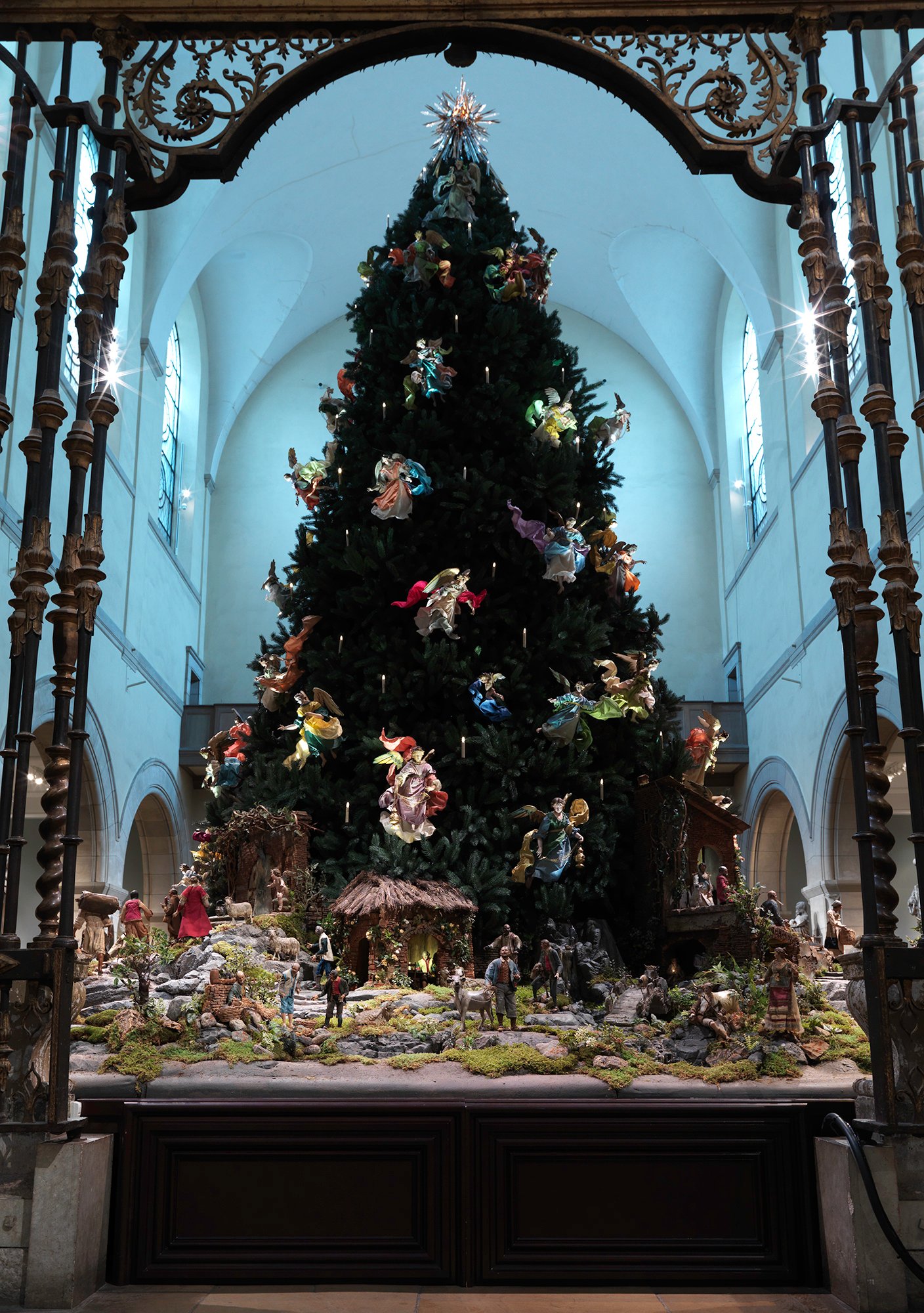 20-foot blue spruce is adorned with a collection of 18th-century Neapolitan angels and cherubs, with a Nativity scene at its base. Image The Metropolitan Museum of Art, New York

4. The Metropolitan Museum of Art

Another favorite remains the Metropolitan Museum of Arts 20-foot blue spruce, part of the museumsChristmas Tree and Neapolitan Baroque Crchedisplay. Located in the Medieval Sculpture Hall, the tree is decorated with 18th-century cherubs and angels,along with 71 figures at the Neapolitan Nativity scene at its base. The late artist Loretta Hines Howard began collecting the crche figurines in 1925 and developed the idea to present the tree with the Nativity scene underneath, debuting at the Met in 1957. The tree will be on view until Jan. 7. 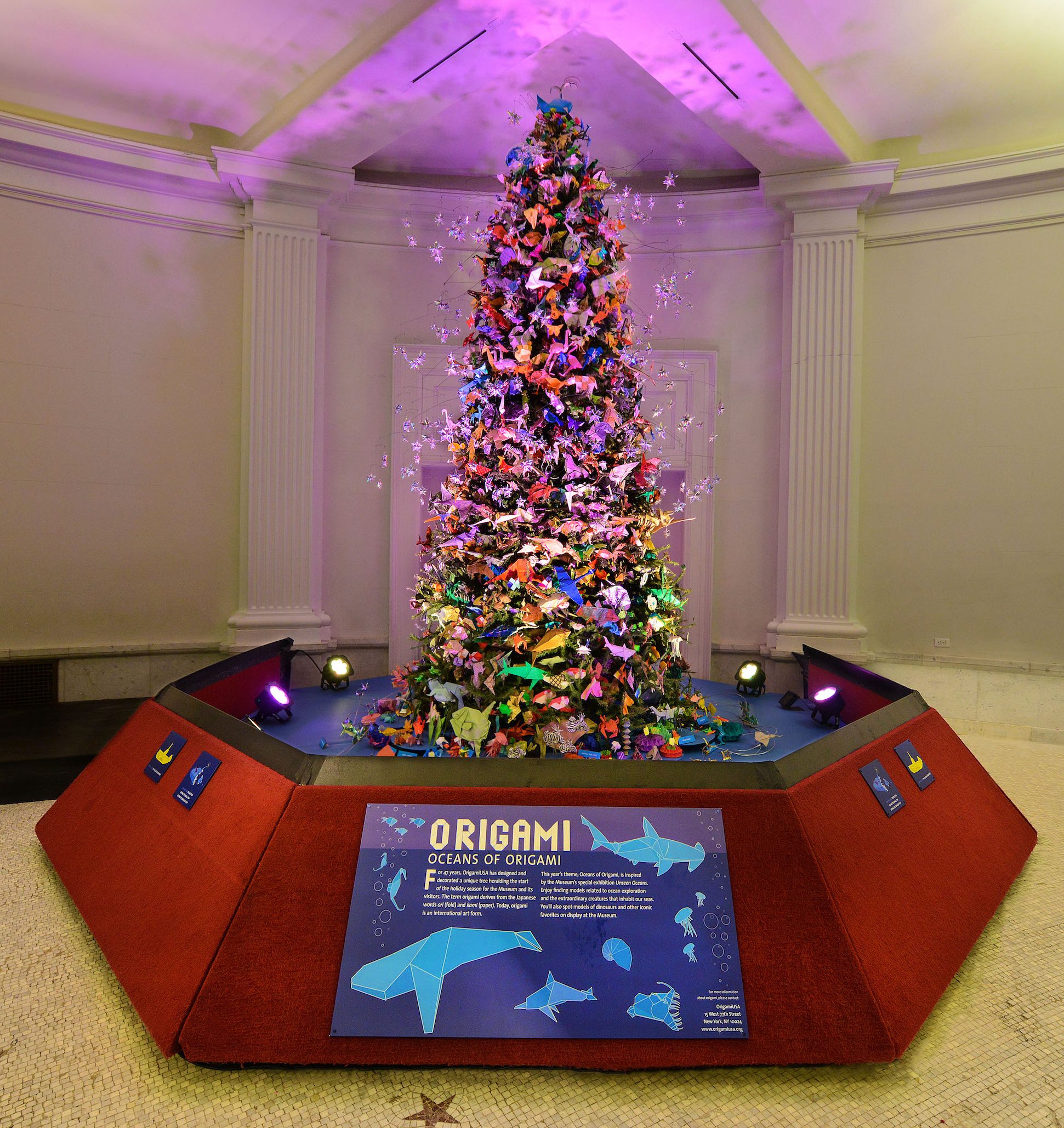 The American Museum of Natural Historys Origami Holiday Tree returns this season with a new theme: T. rex and Friends: History in the Making. The trees ornate decor includes more than 800 hand-folded paper models created in partnership with Origami USA. After over a year of planning and paper folding, volunteers have just four days before Thanksgiving to decorate the 13-foot tree. See the craftmanship for yourself on the museums first floor until Jan. 12. 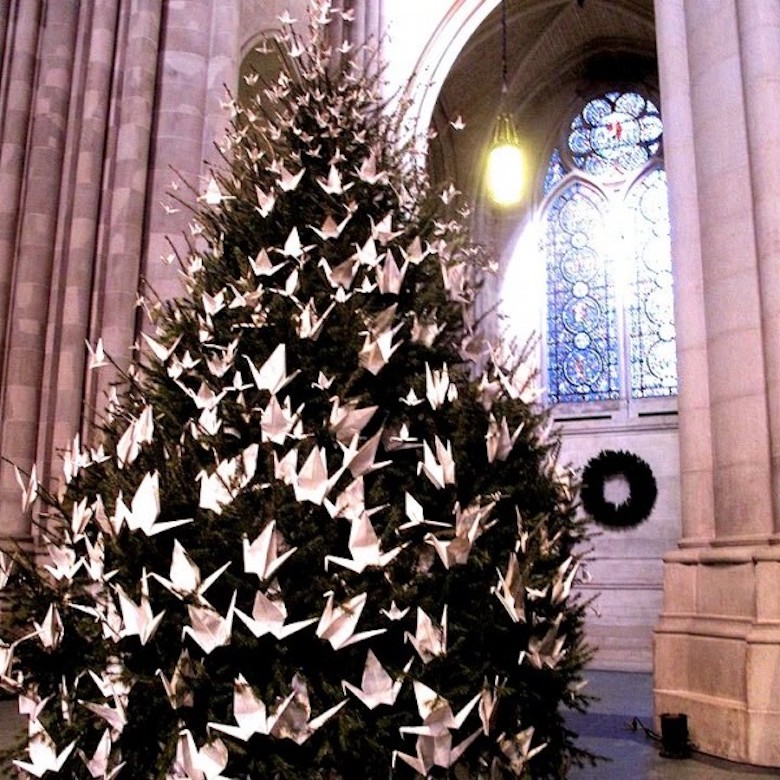 Photo courtesy of the Cathedral ofSt. John the Divine

6. Cathedral of St. John the Divine

Visitors can enjoy the Cathedral of St. John the Divines special paper-crane tree, a30-year-old tradition. The 20-foot-tall Peace Tree sits in the lobby of the stunning Morningside Heights cathedral, serving as a symbol of harmony, longevity, and reconciliation. A legend in Japan says anyone who folds 1,000 paper cranes is granted one wish. According to the church, their holiday tradition was inspired by Hiroshima survivor Sadako Sasaki, who spent the last few years of her young life folding origami cranes. This season, the Peace Tree will be on display from Dec. 16 through Jan. 6. 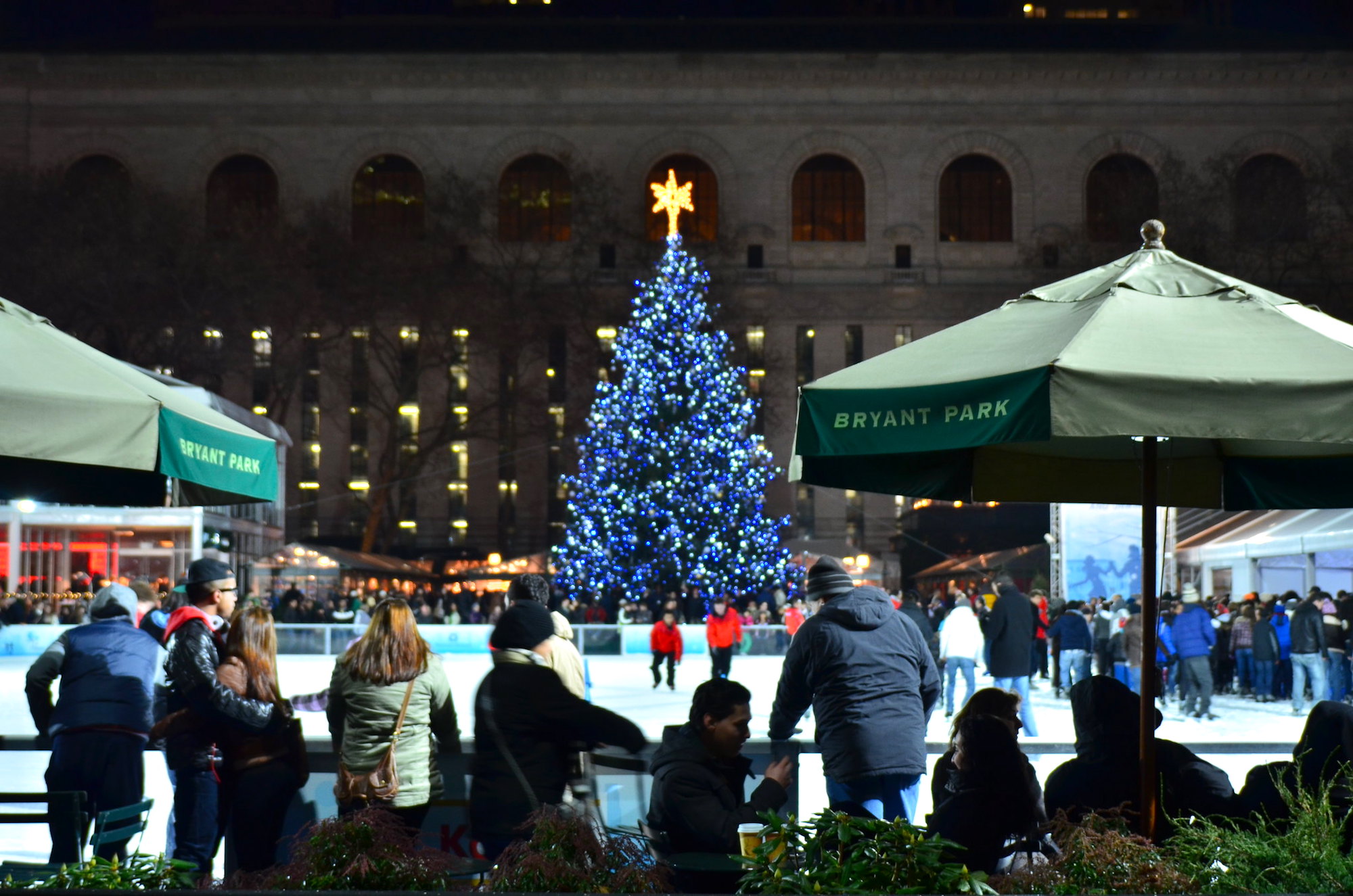 On Dec. 5, the holiday season officially kicks off at Bryant Parks winter village with a tree lighting ceremony and sing along. While the Midtown park has been giving us holiday vibes since opening its shops and ice skating rink on Halloween this year, things gettruly festive Thursday with Christmas carols led by Harlems youth chorus DREAM Choir, performances by skaters like Ryan Bradley and Evelyn Walsh, as well as fireworks and an appearance by Santa Claus. 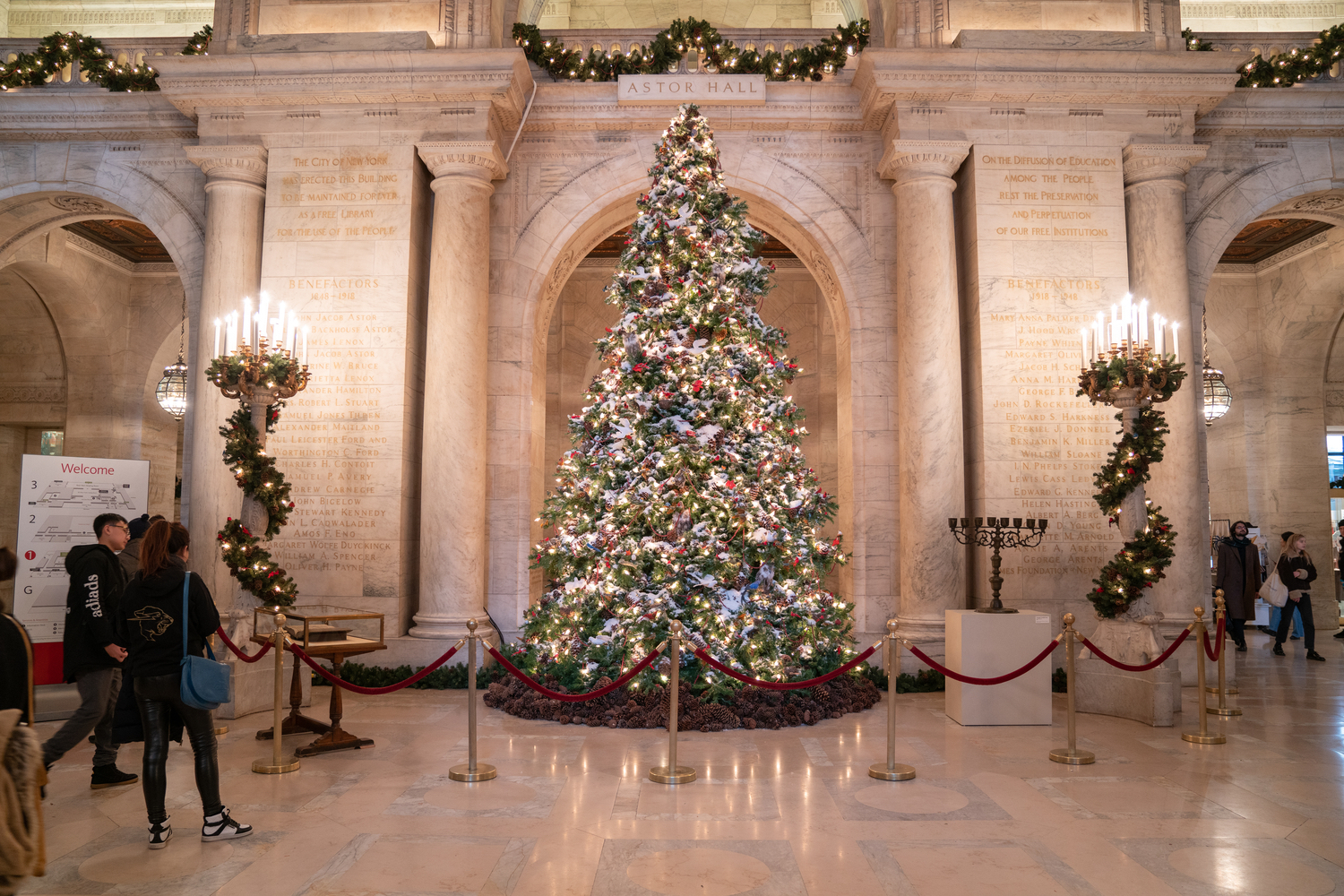 Photo by Jonathan Blanc for NYPL

The New York Public LibrarysstatelyChristmas Treestands tall in the Stephen A. Schwarzman Building. The librarys classic take on the tradition fits perfectly with its surroundings, the white marble entranceway of Astor Hall. In addition to the tree, the library is decking the halls with wreaths on itsiconic marble lions, Patience and Fortitude, an 18th-century menorah, a 16th-century Quran, and a special installation of Charles DickenssA Christmas Carol, along with other holiday literature. The decor and special collections will be on view until Jan. 5. 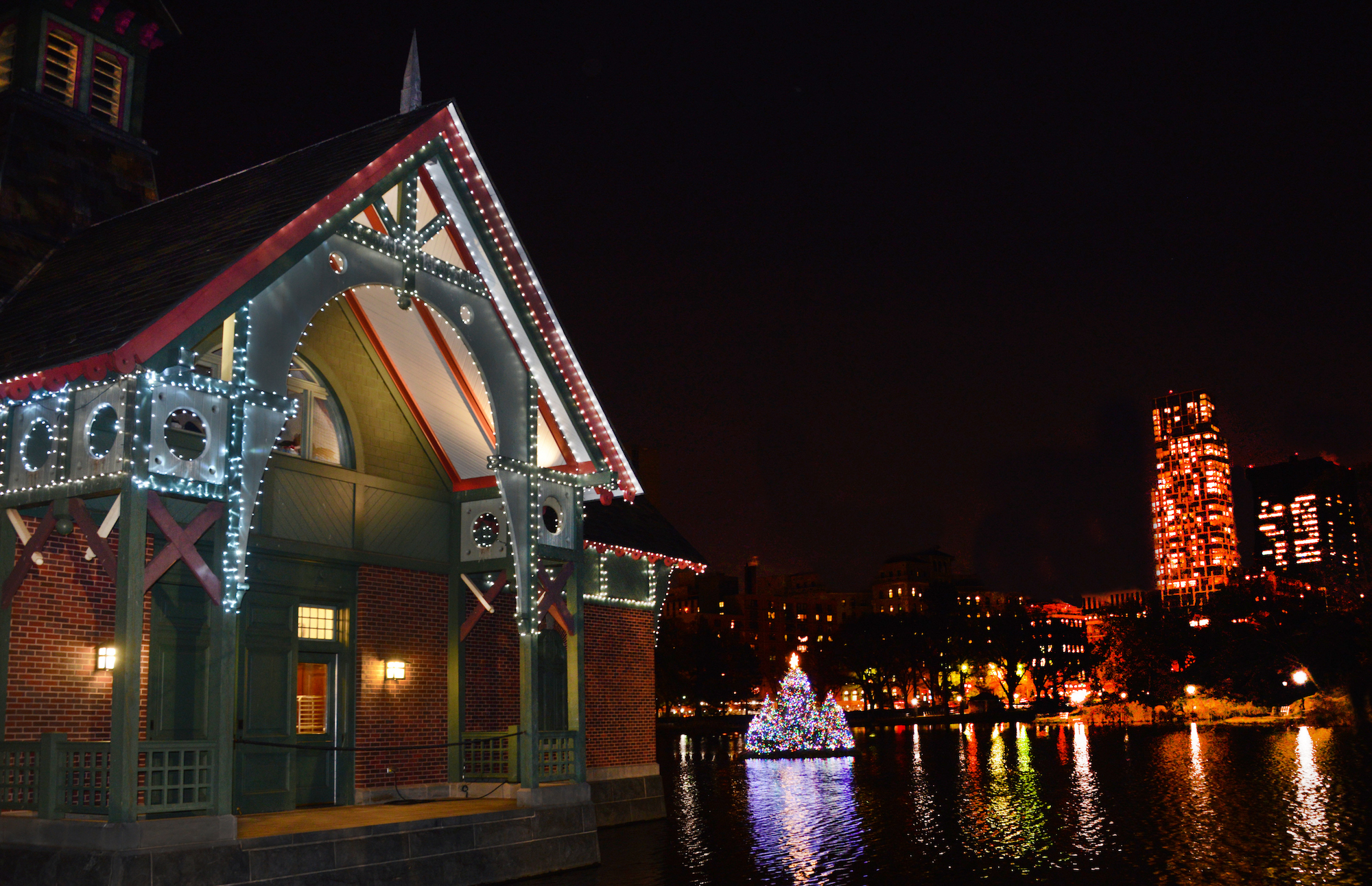 For uptown Manhattanites, the Christmas tree in Central Park offers a great alternative to the chaos of Midtown. For the 23rd year, the Central Park Conservancy will bring a beautifully decorated flotilla of trees to the Harlem Meer, located inside the park off of 110th Street. During its holiday lighting on Dec. 5, expect to meet Santa, sing carols, drink cocoa, and watch an ice carving demonstration.

A holiday icon in its own right, the Plaza Hotel offers some of the citys most quintessential experiences, especially for those out-of-towners celebrating in the Big Apple. Admire the lovely architecture of the Henry Janeway Hardenbergh-designed hotel while taking in the towering Christmas tree in its lobby. The Plaza is also hosting a number of holiday-themed events, from a Home Alone-inspired package to photos with Santa. 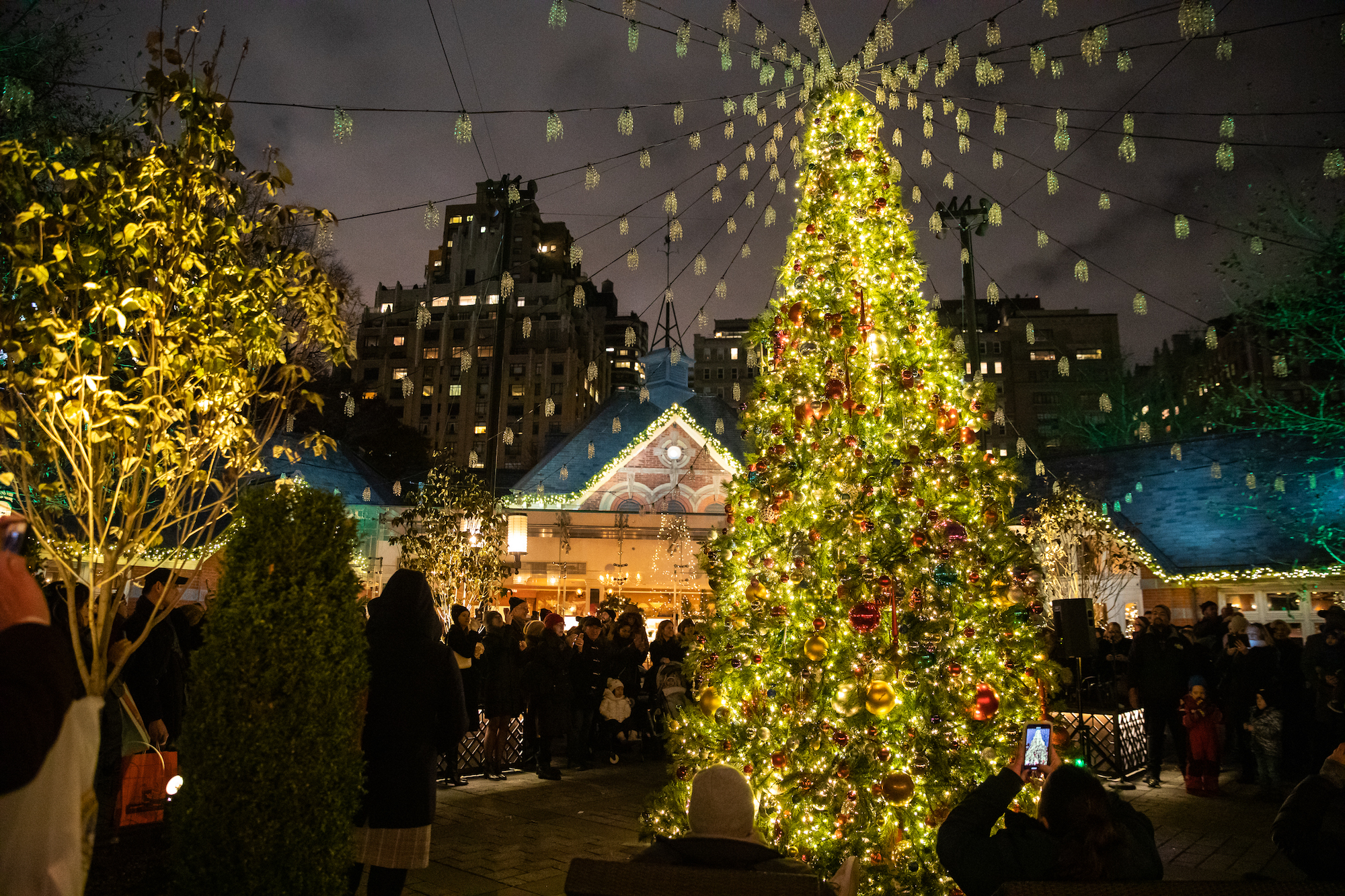 Photo courtesy of Tavern on the Green

The historic restaurant Tavern on the Green is bringing holiday cheer to Central Park this year with a 20-foot Christmas tree. Decorated with roughly 2,000 ornaments and 10,000 lights, the Taverns tree will stand outside of the restaurant at 67th Street and Central Park West. During the lighting ceremony on Dec. 3, expect to hear holiday carols from the New York LaGuardia High School of Music & Art and Performing Arts, as well as enjoy free cider, hot chocolate, and treats from Chef Bill Peets. This year, the restaurant is teaming up with the West Side Campaign Against Hunger, with five percent of all proceeds made on Tuesday donated to the organization. 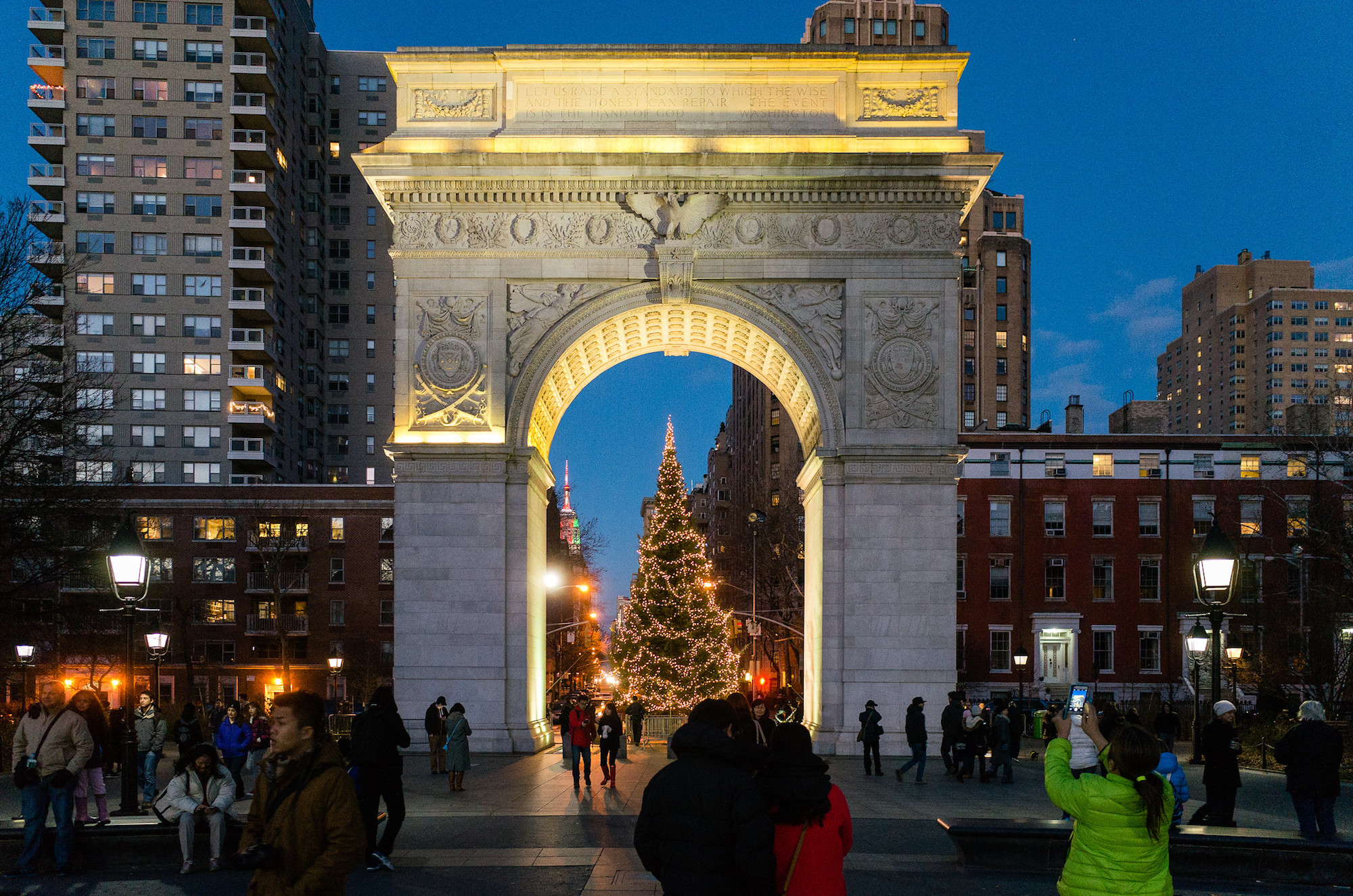 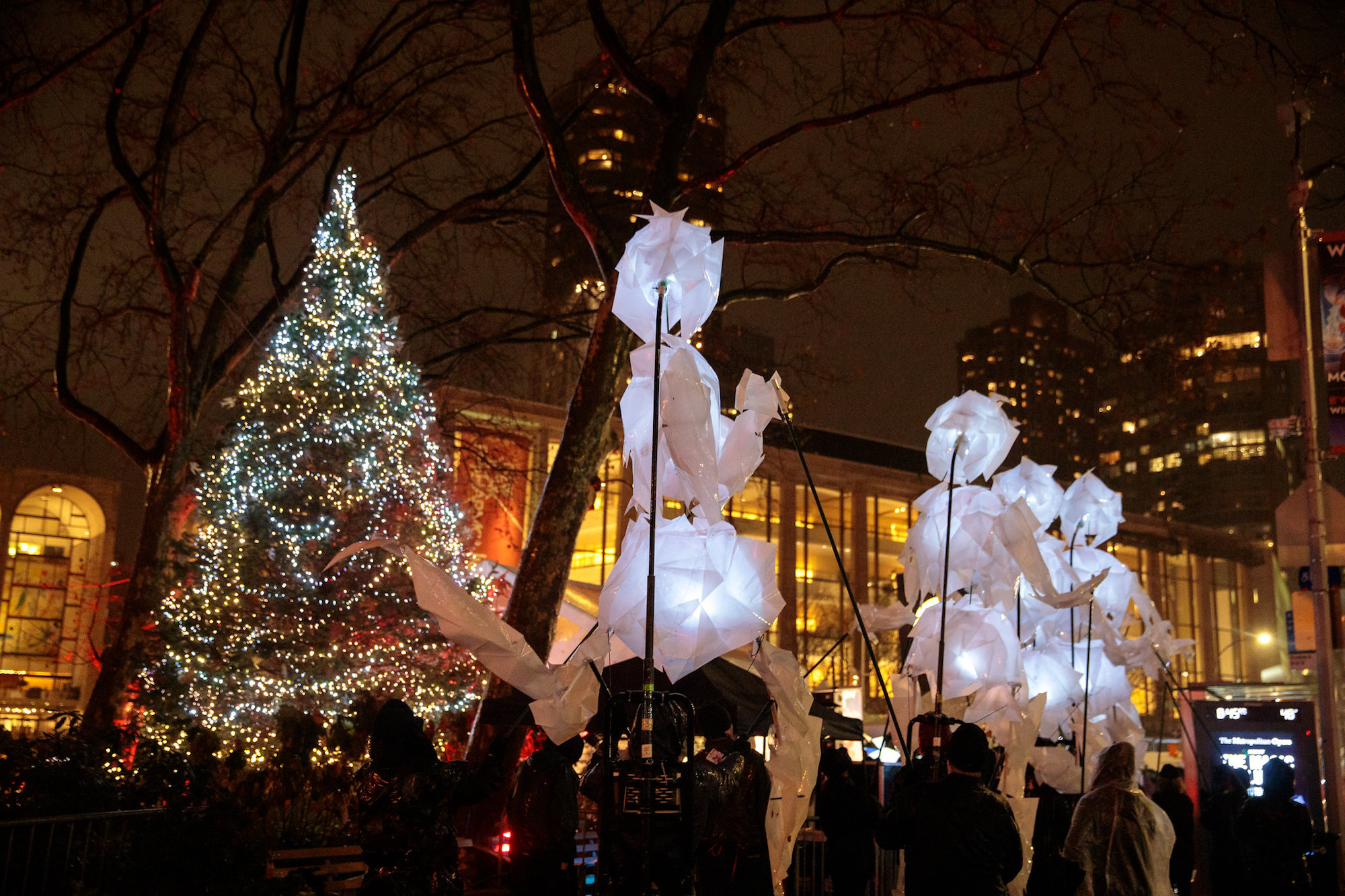 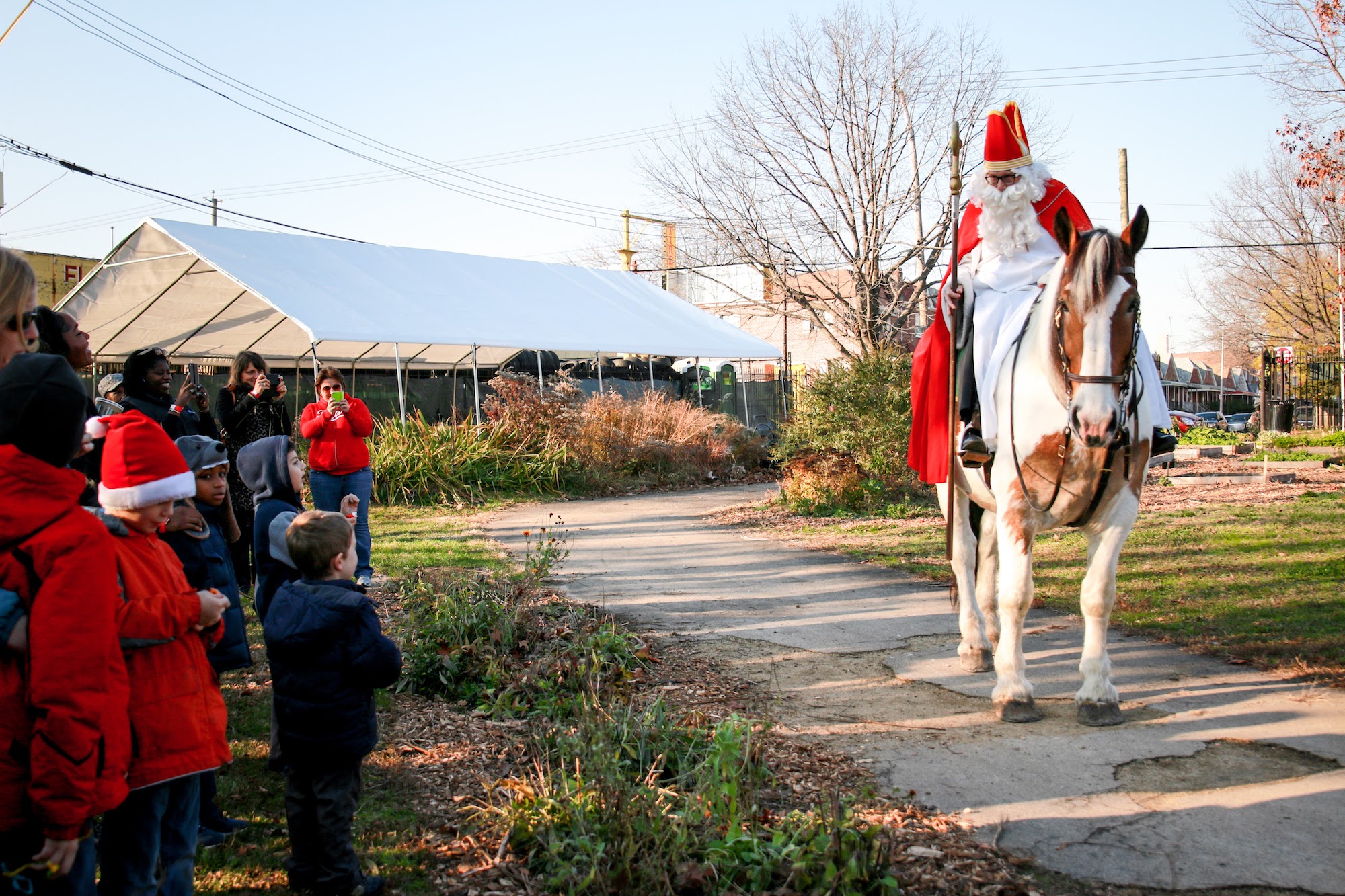 Photo by Cindy Hu for the Wyckoff House Museum

14. Sinterklass at the Wyckoff House Museum

Go Dutch this holiday season at New York Citys oldest house: the Wyckoff Museum in Brooklyn. Serving up one of the most unique tree lighting events of the season, the Wyckoff House Museum is hosting the traditional Dutch eventSinterklaas, also known as St. Nicholas Day,on Dec. 7. In addition to a special visit from St. Nicholas on horseback, hot cider, and colonial games, kids are invited to decorate the tree and help in the tree lighting ceremony. General admission tickets cost $7 for adults and $4 for children. Buy them here. 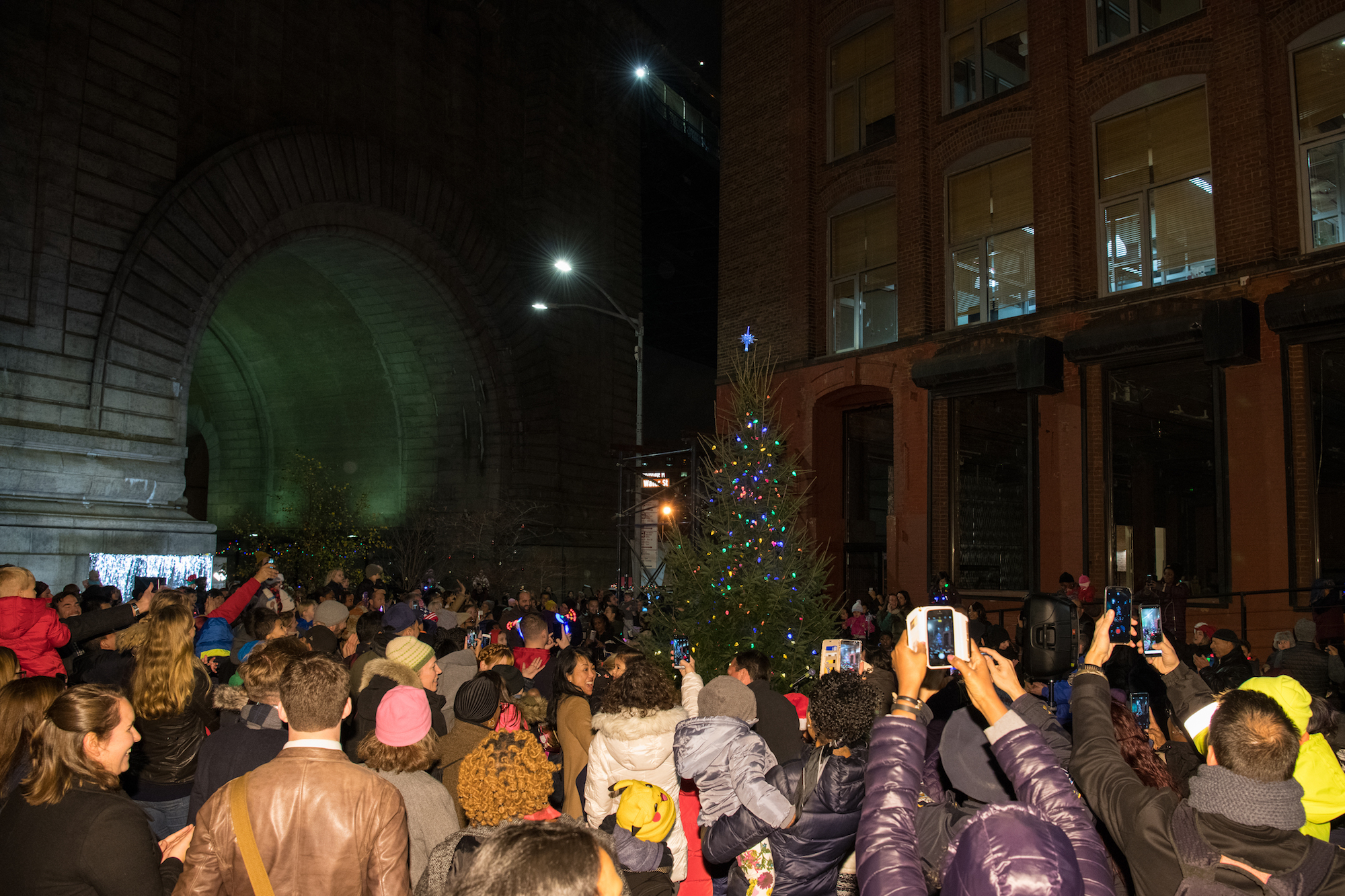 Find one of the best holiday trees in Brooklyn under the Manhattan Bridge. The tree sits in front of the 45-foot high Archway, the perfect background for your holiday snapshots. On Dec. 5, the Dumbo Business Improvement District hosts its 15th annual tree lighting ceremony, featuring Santa Claus, calypso music from a local steel drum band, festive lights, hot drinks and treats, and a projection of yule logs on the Manhattan Bridge. There will also be an opportunity to give back to the community, with a toy drive for children up to 14 years old, a coat drive, and a food drive for the New York Food Bank, which will run through Dec. 24. Get the details here. 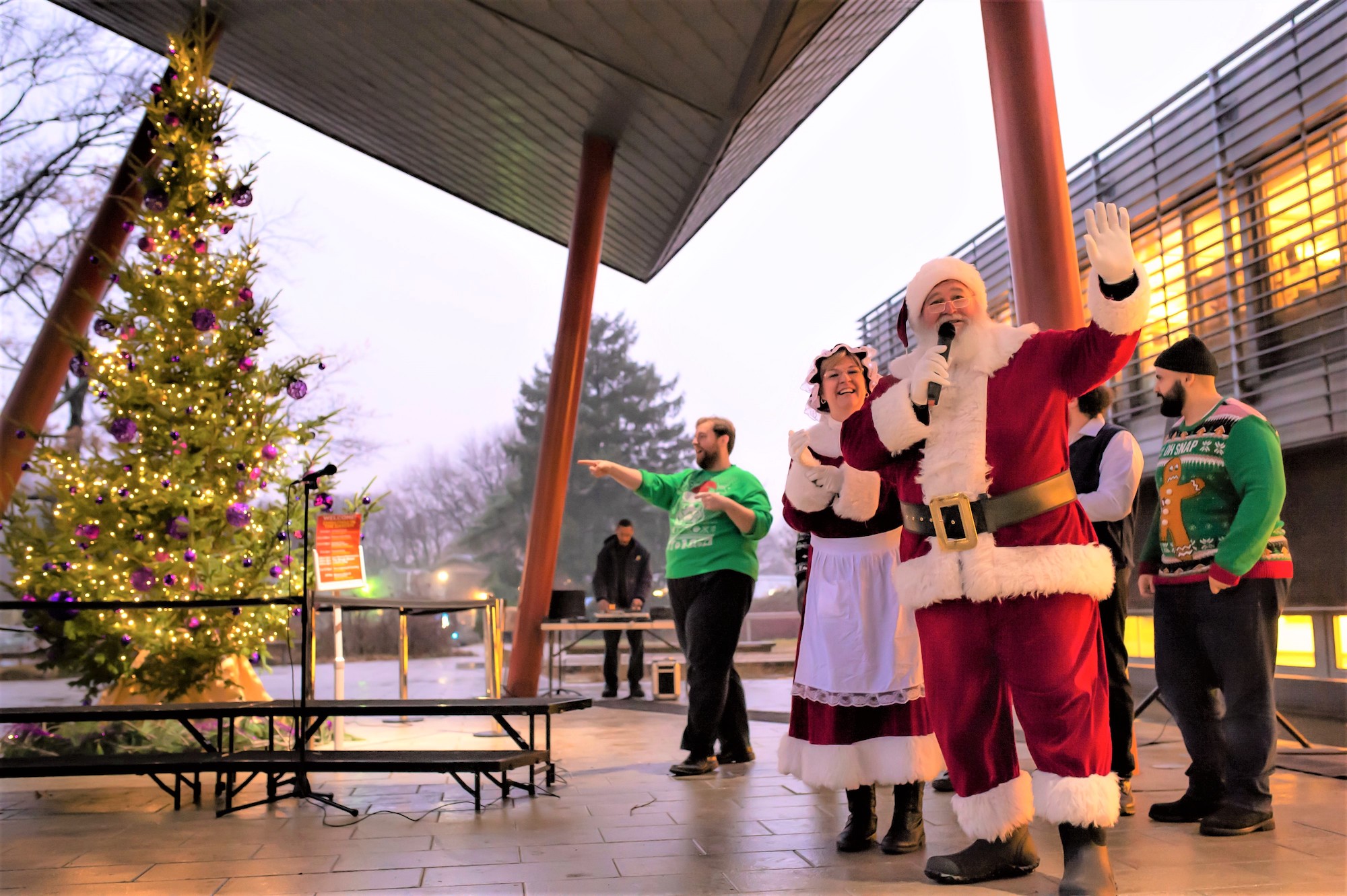 Photo by Eryn Hatzithomas for the Queens Botanical Garden

Another outer-borough favorite is the Christmas tree at the Queens Botanical Garden. Located in Flushing, the garden offers a peaceful 39-acre oasis in one of the boroughs most bustling neighborhoods and their annual Christmas tree fits perfectlyamongits plant life. This years event kicks off on Sunday, Dec. 8 with live performances, photos with Santa, holiday crafts, face painting, and of course the tree lighting countdown. 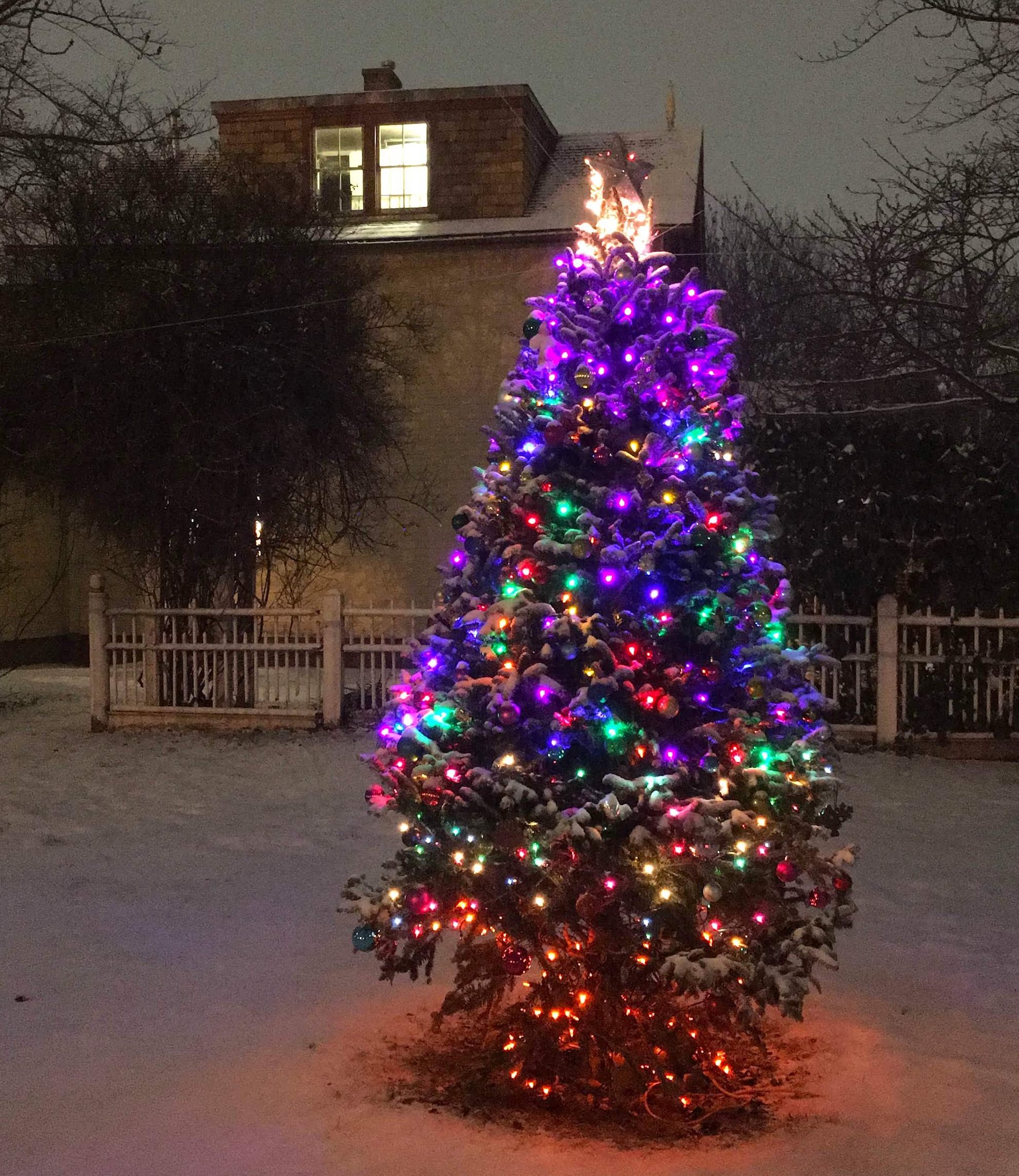 The 2017 holiday tree at the museum; Photo courtesy of the Lewis Latimer House Museum

The Lewis Latimer House Museum, once the home of African American inventor Lewis Latimer, opens its doors this holiday season with a STEM-themed event. On Dec. 15, the Flushing-based museum is hosting a Holiday Tinker Festival, an ode to Latimer, who helped develop the telephone and the lightbulb. Participants can make DIY light-up ornaments, Jingle-bots, and pop-up architecture cards. Sip hot cocoa and watch the colorful tree lighting ceremony in the museums garden at 5 p.m. Register here for the free event.

New York Citys most nautical neighborhood goes all out again this holiday season. The City Island Chamber of Commerce hosts families of the Bronx and all over to its annual holiday tree lighting in Hawkins Park. Enjoy festive caroling and free hot beverages and bites. 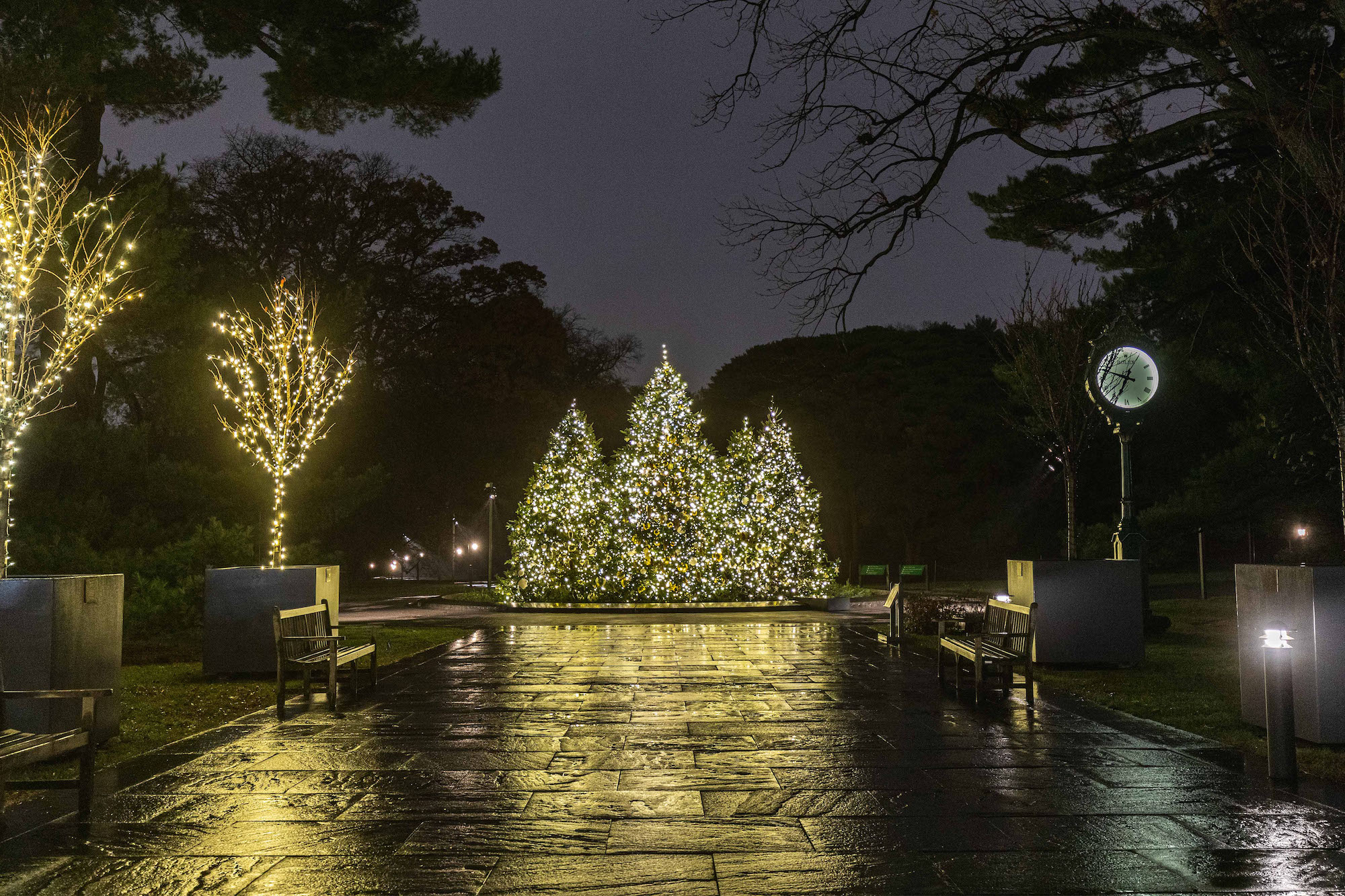 Nothing screams holidays in New York like a trip to the New York Botanical Garden for the Holiday Train Show. While the indoor installation of 175 handcrafted landmarks is a must-see exhibit (especially the entirely new Central Park section), the Gardens holiday tree remains an equally stunning tradition.On Dec. 8, NYBG will host its annual tree and menorah lighting ceremony, accompanied by carolers and special guests. Get the details on the event, along with all Holiday Train Show happenings, here. 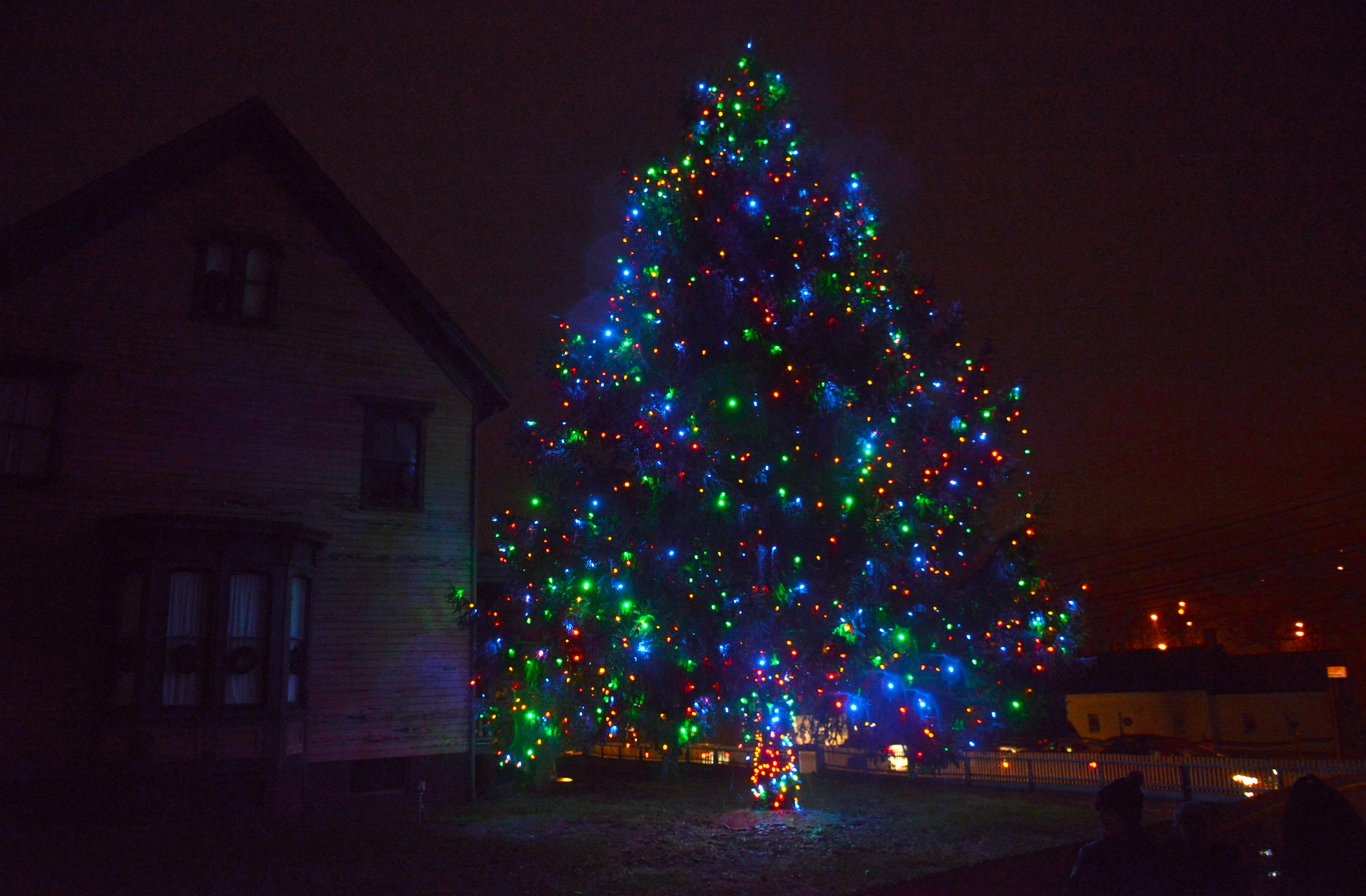 On Staten Island, Historic Richmond Town is celebrating Christmas in 20th-century fashion. In front of the Edwards-Barton House sits a Norway Spruce and a Red Cedar tree, resembling how the yard looked in 1900 when former resident Antoinetta Aquilino tended the homes garden. The Spruce tree, now four stories high, will shine with more than 2,000 feet of lights during the towns annual tree lighting ceremony on Sunday, Dec. 8.

In addition to the tree lighting, the Christmas in Richmond Town event includes ice skating, a giant snow globe for selfies, ornament making workshop, horse and carriage rides, hot holiday beverages, and a visit from Santa. Tickets cost $10 for adults and $8 for kids aged 4-12.