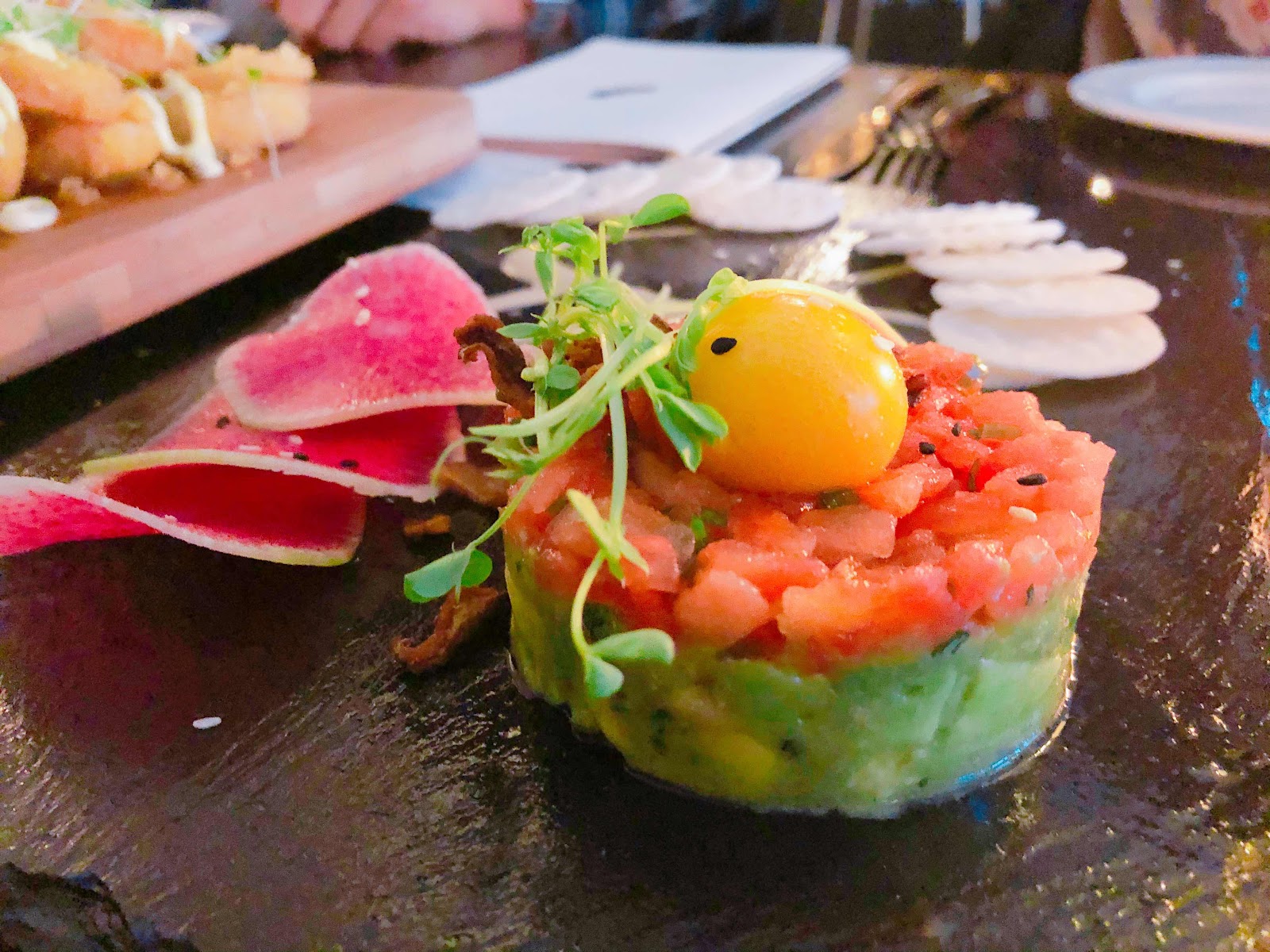 As Mythologys pictures mingled their way into my Instagram feed, the gorgeous looking plant-based dishes drew me in and created a sense of excitement. When I heard the restaurant was started by Chef Doug McNish, a well-known vegan chef in Toronto, it sealed the deal plans were made and a reservation was secured.
Mythology promises an elevateddining experience. Indeed, the esthetics of the dining room with its black, white, and gold motifs gave the restaurant a polished air. The menus enticing dishes, spanning multiple continents, also made the place stand out. 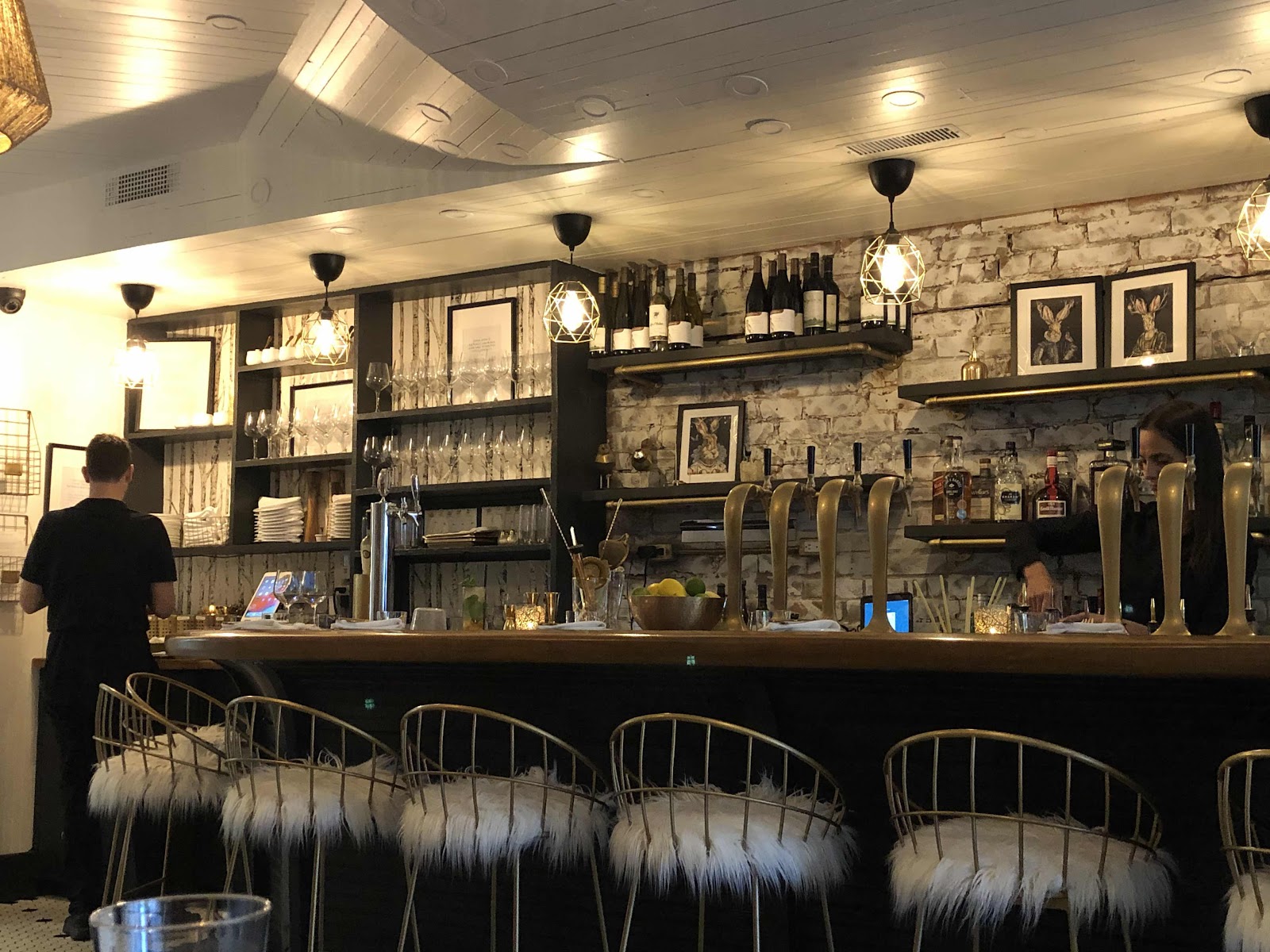 As an amuse bouche was presented, we knew oh yes, Mythology wants to transcend into fine dining. Yet, this first bite also foreshadowed the meal to come: dishes that look great, contain A LOT of ingredients, and then one or two things throws it completely off.
This first bite of pickled zucchini with tomato pesto and garlic chip - it tasted fine, but the garlic chip was so chewy that itd be more aptly described as garlic jerky, leaving a strong lingering taste in my mouth. 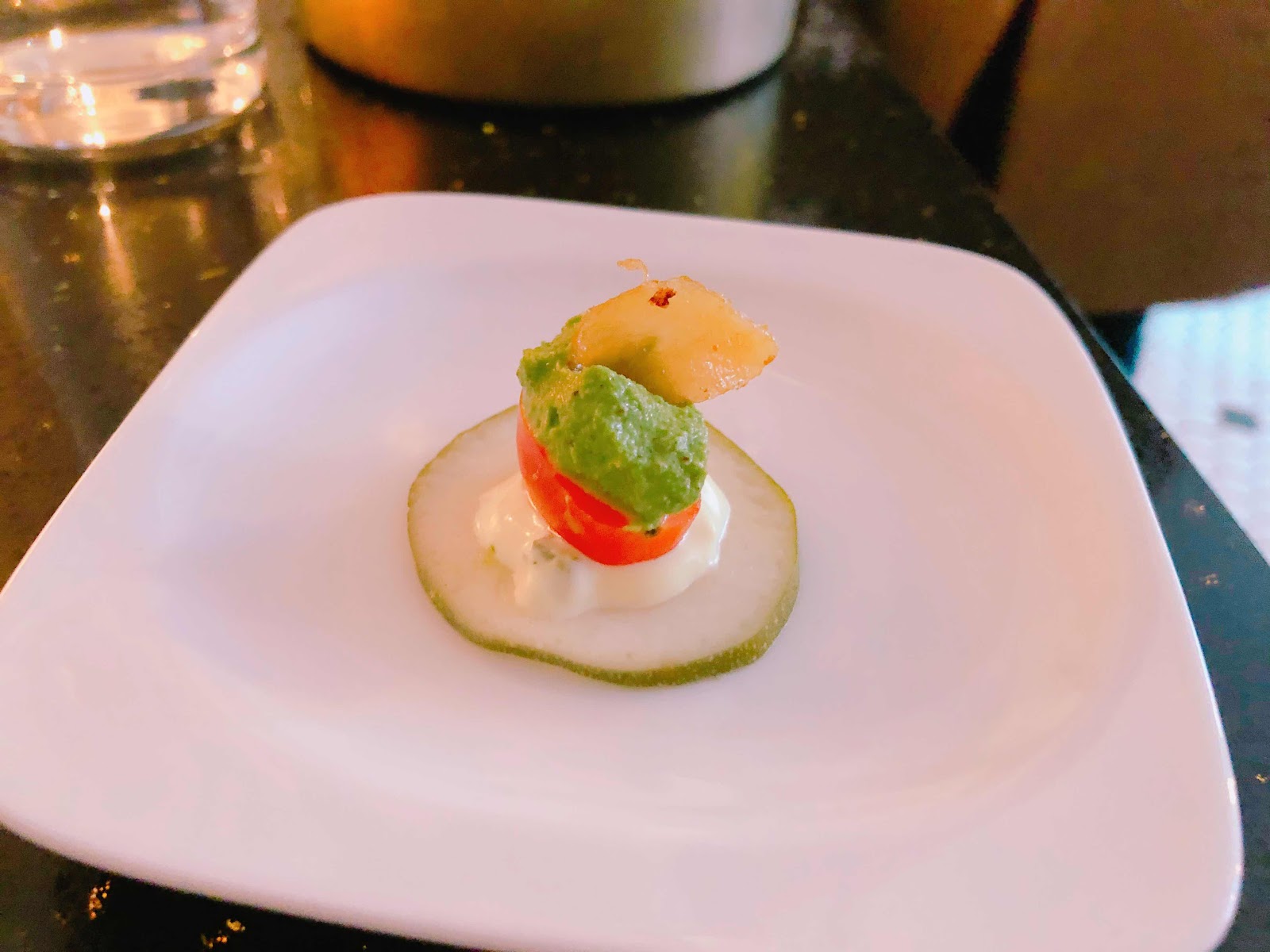 Without the menu, itd be hard to even recite all the ingredients that are part of each dish: their crab croquette special ($21) sat beneath so many garnishes and chips that it felt fussy and confusing. Such a shame, as the actual banana blossom cake was absolutely delicious, the texture oddly like crab, and the chayote relish, when used in small doses, was great. 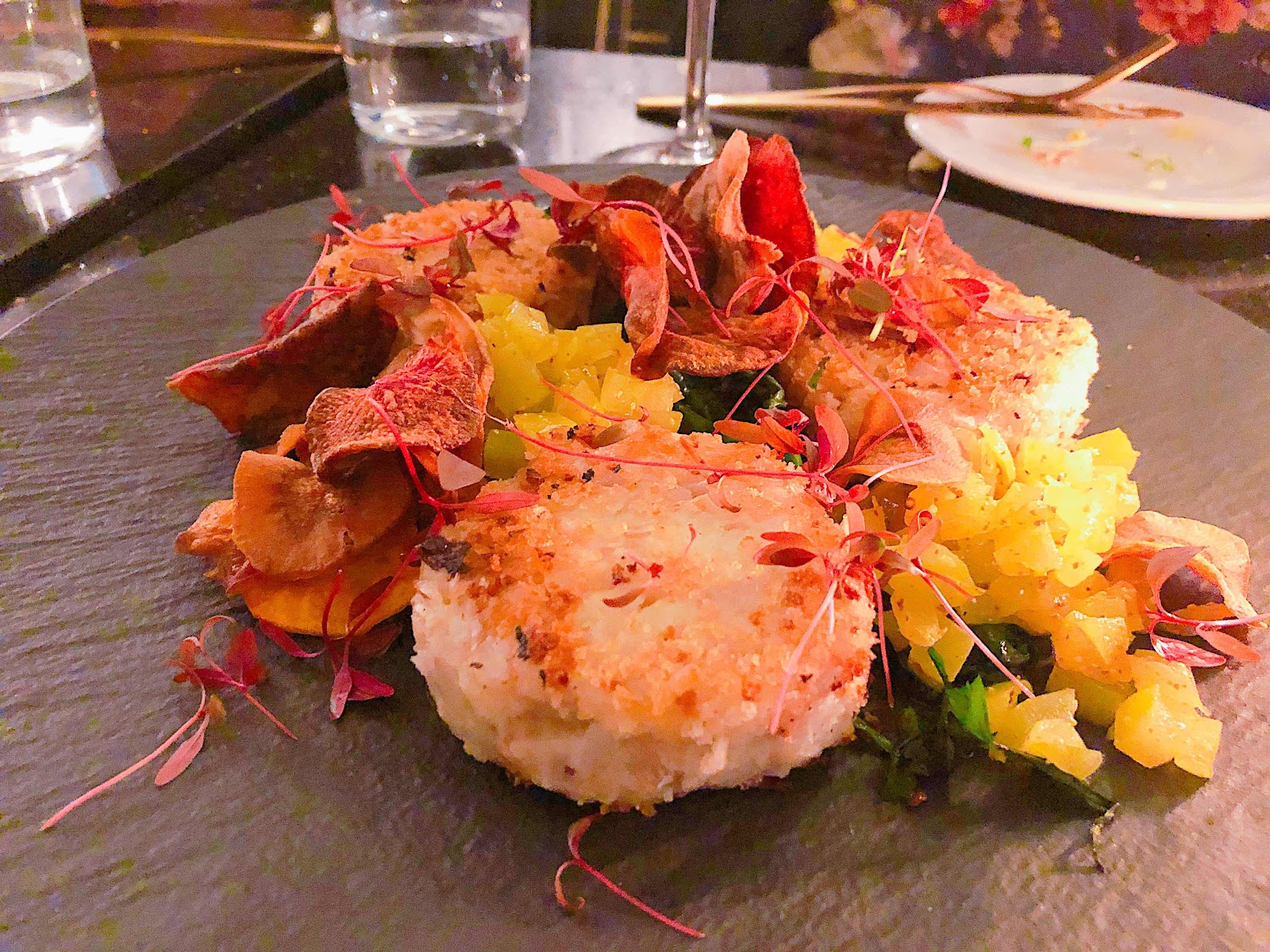 The zaatarcauliflower ($20) felt like a similar dish and while it also had a lot of different elements, they at least complemented each other. Fluffy falafels are shaped into pucks and deep fried, then enhanced with sweet pomegranate, citrusy tahini, and fresh quinoa taboloui. The only downfall was the actual cauliflower seems secondary really, this should be renamed as falafels and cauliflower. 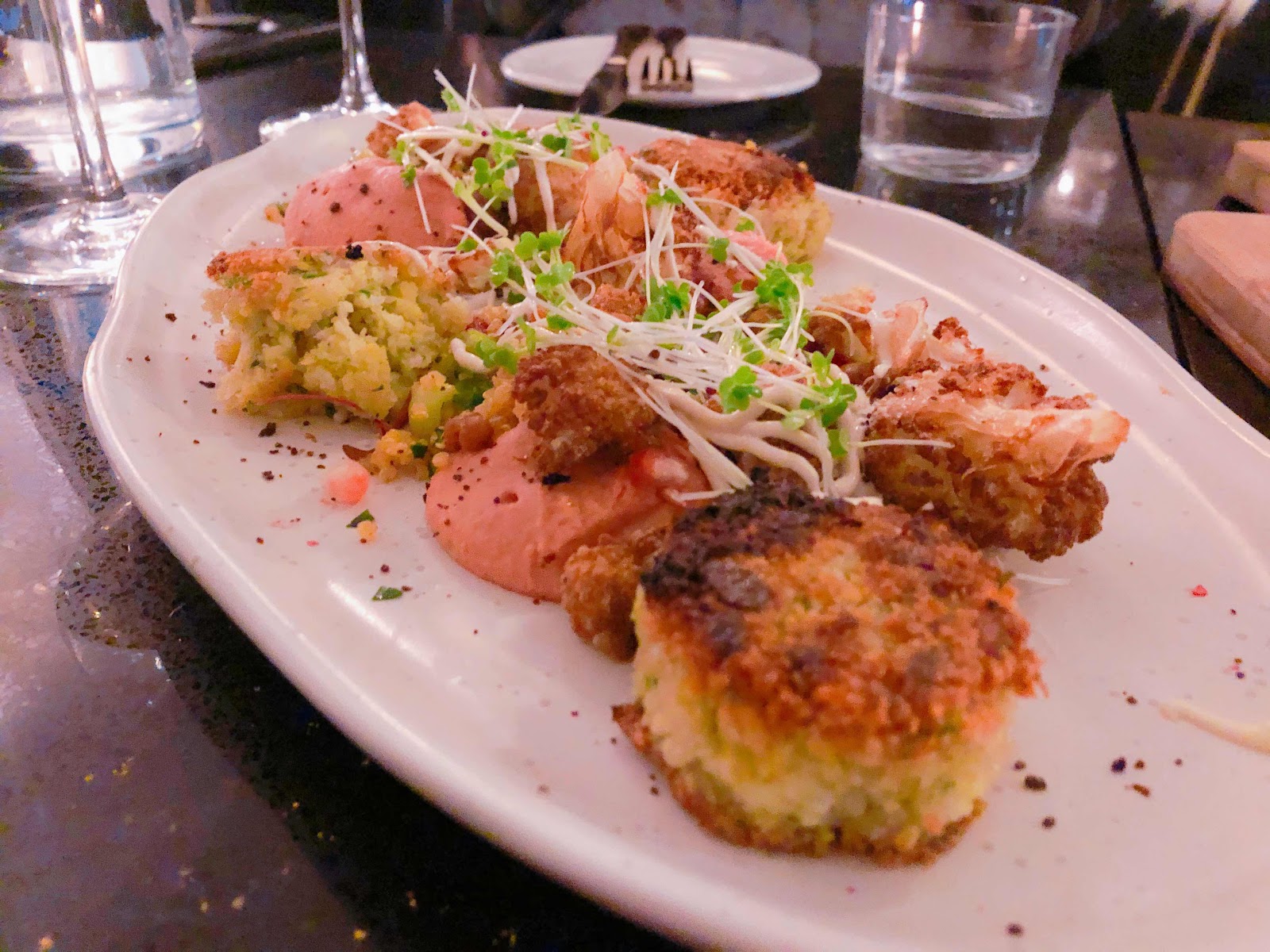 As soon as the coq au vin ($22) was presented I knew something was off. Somehow the dish thats synonymous with slowly braised meat in red wine arrives looking like a deep fried chicken cutlet? Sure enough, the seitan chicken was cut too thickly and along with the garlic mashed potatoes made for a heavy feeling meal. 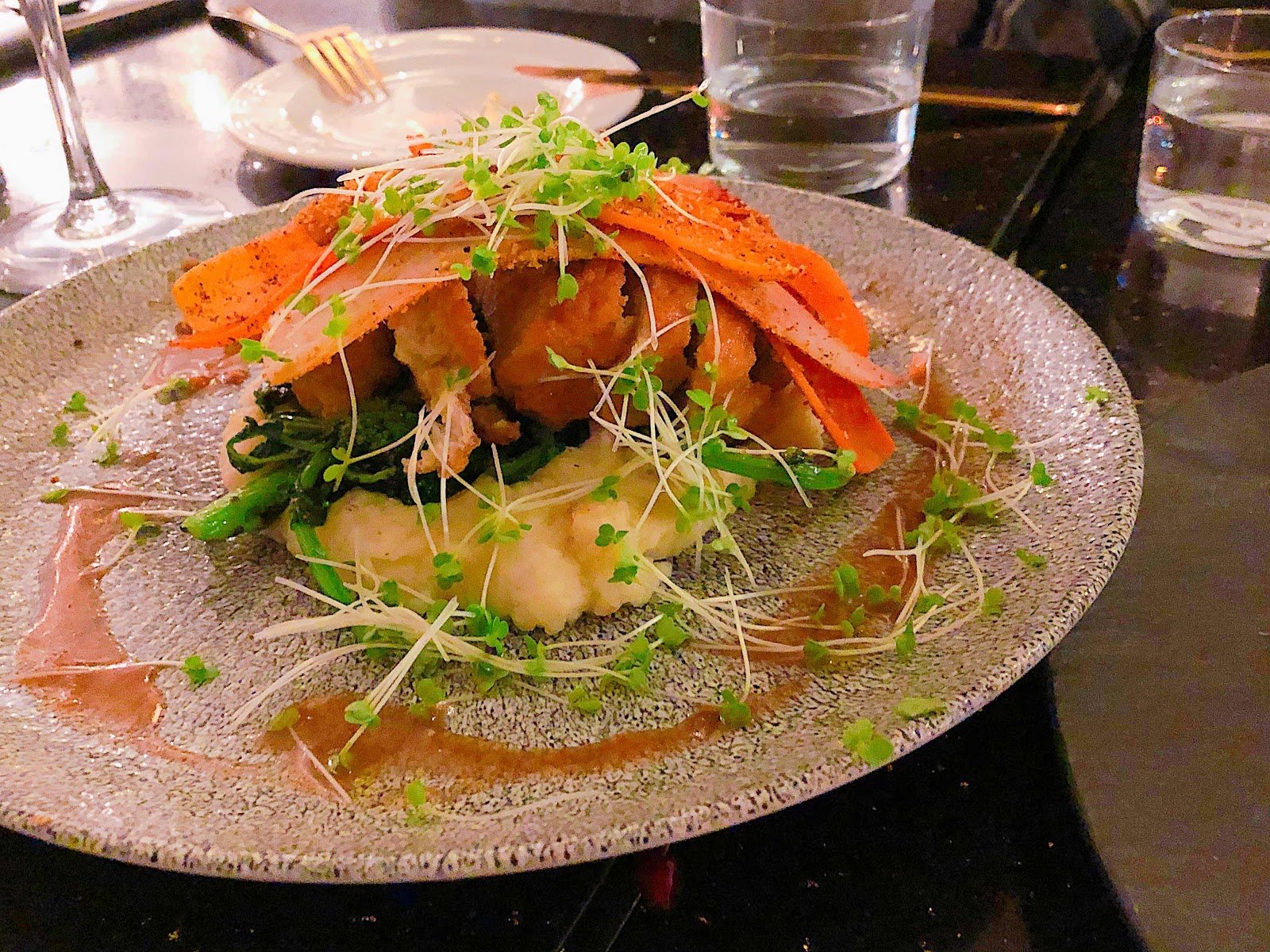 Maybe French cuisine just doesnt lend itself to being vegan after all, its a cuisine that relies so heavily on butter, cheese, and meat. If the chefs sliced the seitan thinner and reimagined the dish as schnitzel substituting the pastrami carrots and rapini with braised cabbage it may actually work.
Of all the dishes, the one I thought Mythology would ace was the mushroom ravioli ($24). Ive been to other vegan restaurants that makes great mushroom pastas with cashew based cream sauces. While the porcini cream sauce was spot on, in terms of flavours, it was too gluey and the pasta forming the ravioli was also so thick that the consistency resembled leftover pasta re-heated in the microwave.Similar to the crab croquette, the dish was then further ruined by having way too much stuff on it: hazelnut crumbs, garlic chips, baby greens, and truffle lemon vinaigrette?! All things that do nothing to help the ravioli. 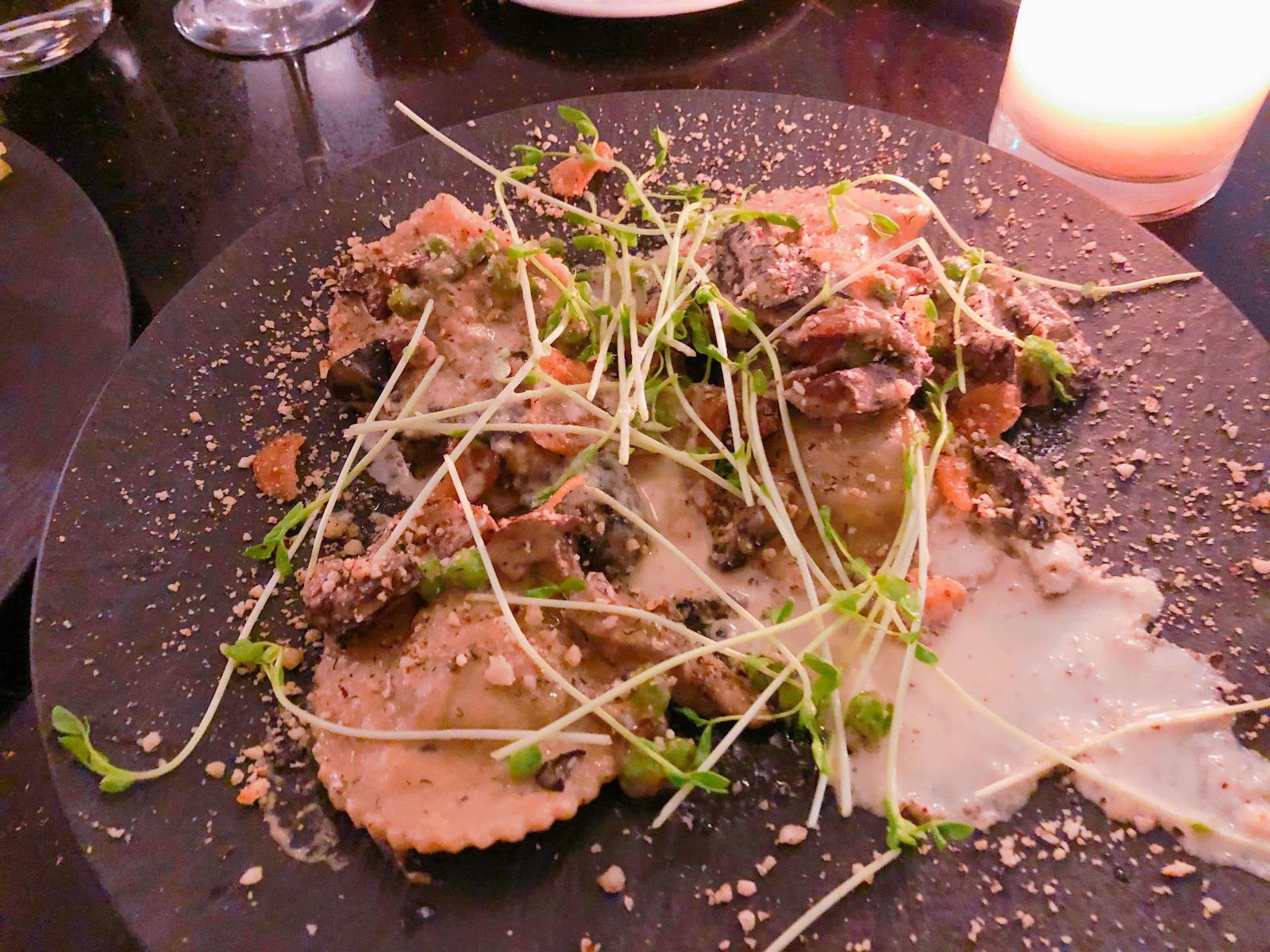 When we saw the avocado and tuna tartare ($13) it was stunning. The egg yolk, which actually oozed, was also so impressively recreated. But then we bite into it and are repulsed by the saltiness, to the point we had to send the dish back. 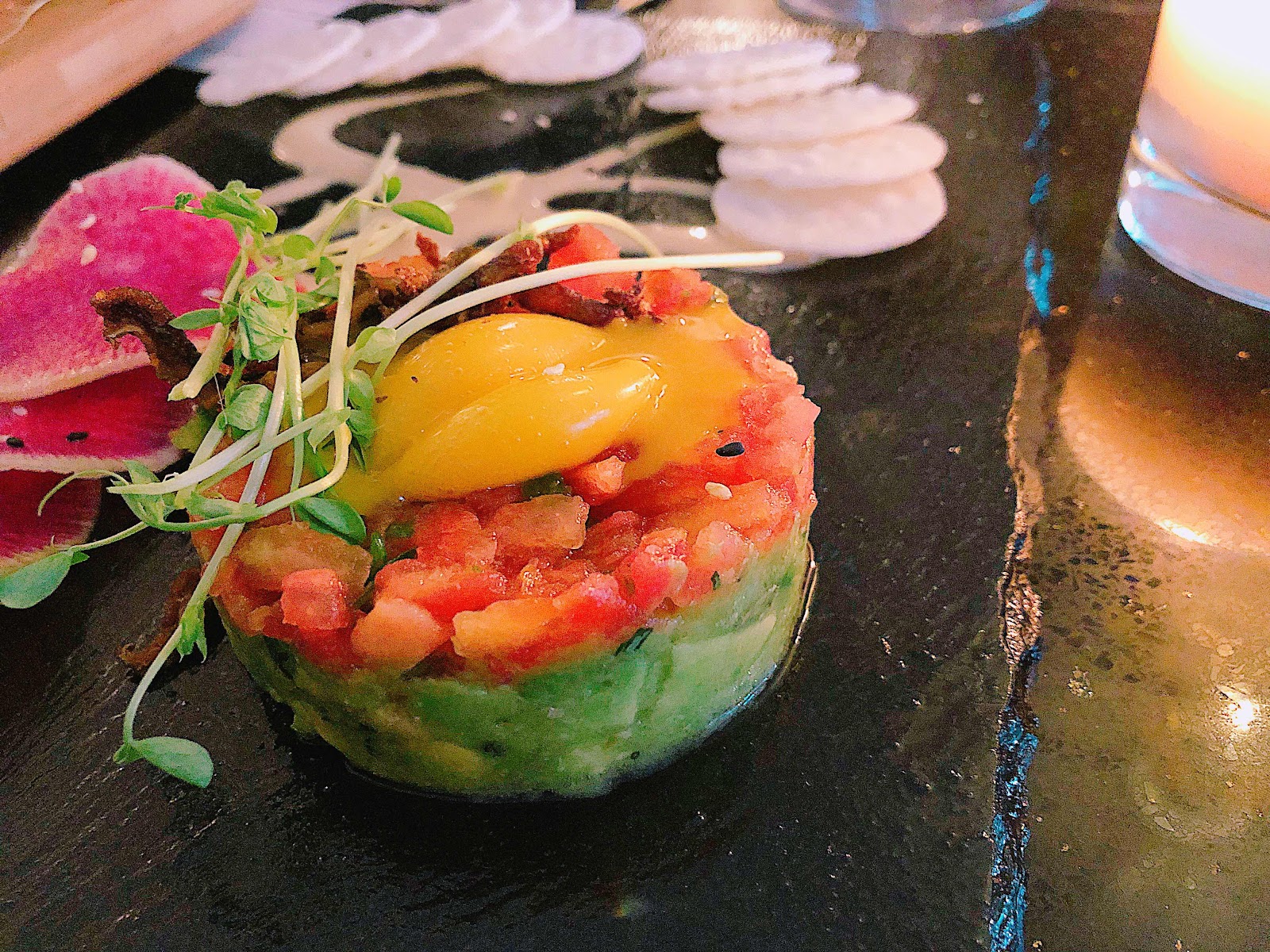 Were advised that its because the tomato is cured in salt so the texture changes to represent tuna. In my mind, couldnt that also be done by simply pressing the tomato? At the very least, rinse off the cured tomato before using it. It was so salty that after one bite of the dish, it threw us off on the seasoning of everything else. After the shock to the taste buds, the next dish seemed bland.
Not all the dishes were disappointing, some of the tastiest ones were also the simplest. We all loved the panisse ($8; not pictured as it came out terrible), which is listed as a side on the menu but could easily work as a starter. The deep fried wedges tasted like mozzarella sticks, but finishes lighter and left us wanting more.
Who would have thought that king oyster mushrooms could be made to look like calamari ($14)? Indeed, biting into it you can tell its not seafood, yet the texture is uncannily similar. Served freshly fried with the crispy garlic cornmeal crust and cooling tartar sauce, we loved it so much we got another order. 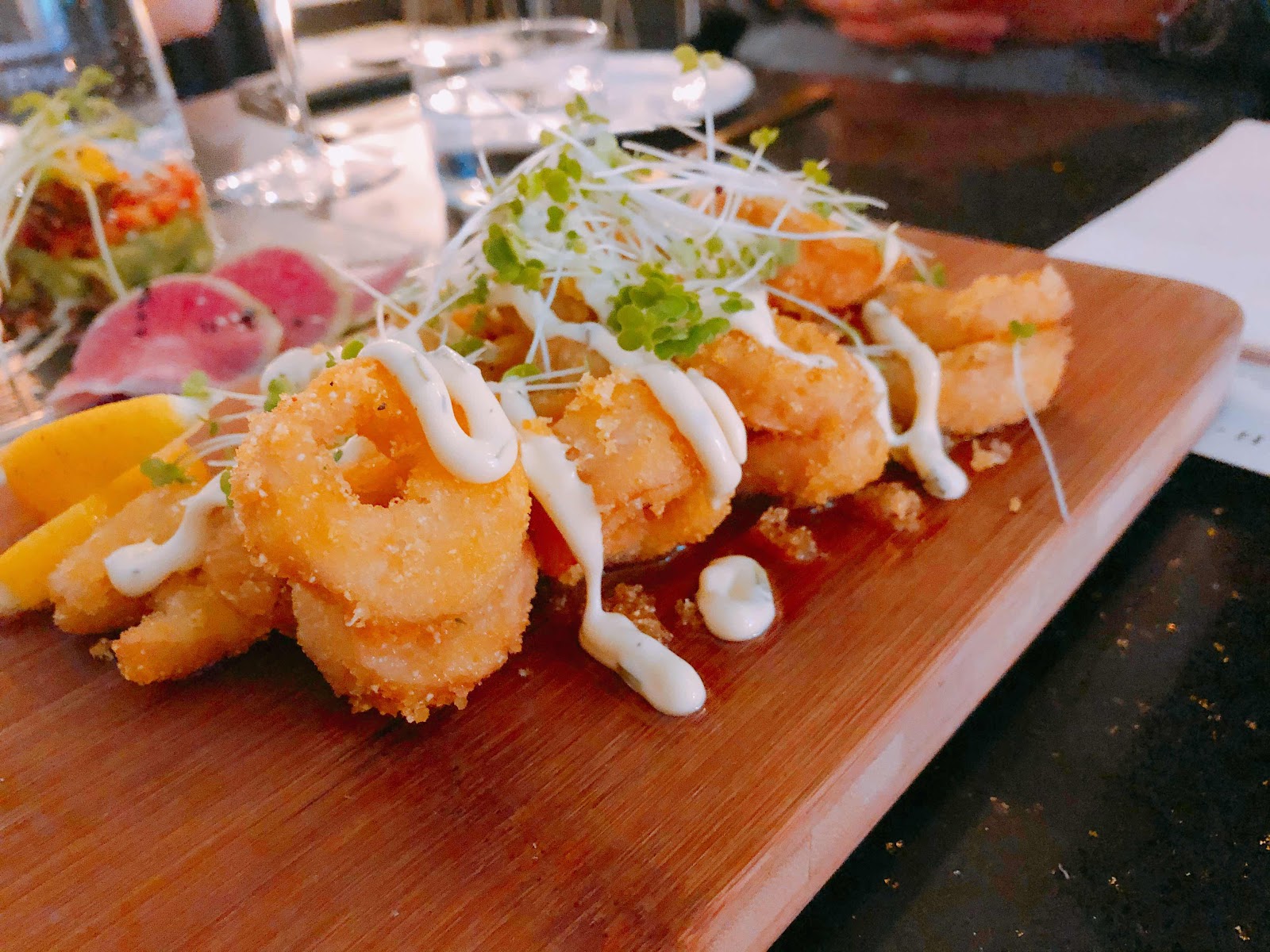 Its then we discovered portion sizes are inconsistent: the first such a mammoth mound of large calamari pieces filling most of the board, while the second serving barely covered the middle and the pieces puny like it was made with the leftover ends. 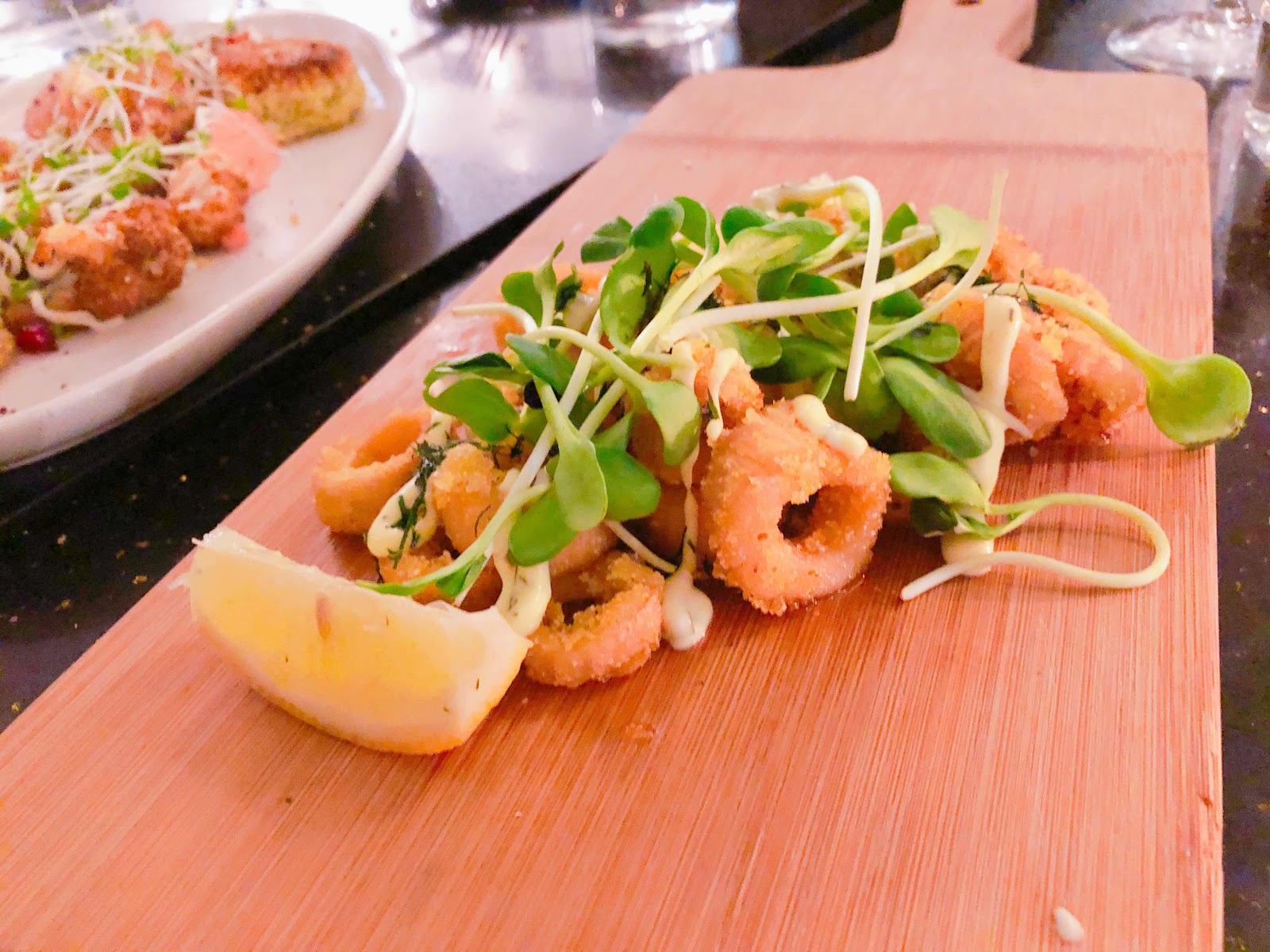 I cant help but feel I was tricked into eating at Mythology by great marketing kudos to their Instagram photographer. Even with the terrible experience, I cant help but want the restaurant to succeed. Hence, I offer two words of advice: keep it simple and restrict garnishes to three items; and if the dish doesnt fill the initial vision, pivot and change it into something else. I sincerely hope it gets better from here, Toronto needs more meatless fine dining options.
Overall mark - 5 out of 10

How To Find Them
Location:Toronto, Canada
Address: 1265 Queen Street West
Website:https://www.mythologytoronto.com/
Follow me on twitter to chat, be notified about new posts and more - https://twitter.com/GastroWorldBlog
____________________________
Gastro World's Grading System

Is That It? I Want More!

Other Gastro World posts similar to this: